Black Friday Skips Across The Pond To U.K. 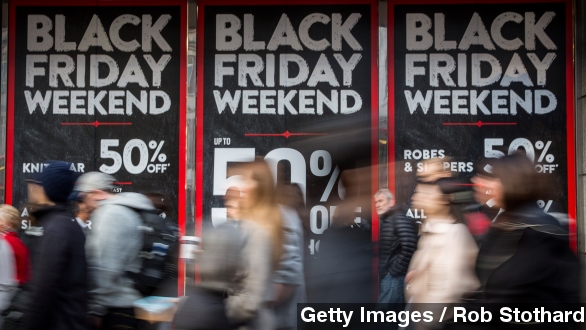 SMS
Black Friday Skips Across The Pond To U.K.
By Ben Lawson
By Ben Lawson
November 28, 2014
Black Friday has arrived in the U.K., but how did it get there considering that the U.K. doesn't celebrate Thanksgiving?
SHOW TRANSCRIPT

America has exported a tradition across the pond that some Brits probably wish they could return — Black Friday.

This is the first year the shopping madness has become a thing in the U.K., but how did it even make it over there in the first place?

After all, Black Friday has grown in popularity in the states because many people are off work thanks to Thanksgiving, a holiday that's only celebrated in America. (Video via YouTube / Jerry Bailey)

Amazon is taking credit for first introducing Black Friday to Brits in 2010, when the online retailer provided savings to customers on its site. From there, the practice slowly began to take hold in physical stores.

And now, a market analyst tells Time that U.K. retailers use the day to offset struggling sales, saying "Black Friday became this holy grail of, 'It's going to solve all of our problems.'"

However, Financial Times writes that the jury is still out on how much good Black Friday actually does for retailers, explaining "bargains eat into profits and condition shoppers to wait for further discounts. Manic Black Fridays have not necessarily translated into bumper overall sales."

Now that Black Friday has arrived in the U.K., has it taken hold the same way it did in America?

"It's a little bit strange. I don't know if it will catch on here because us Brits are a little bit different. We like things organized and set before it happens. It might not catch on," one shopper told The Guardian.

Maybe not, but Black Friday madness is showing all the typical signs of what could be a long-running and chaotic tradition in the U.K. Several arrests were reported as fights broke out in stores across the country with some stores closing early due to things getting a little too eventful.

Black Friday has not taken hold in parts of Europe outside of the United Kingdom but if it does, at least the Spanish might be more accustomed to handling the stampede of shoppers. (Video via The Telegraph)