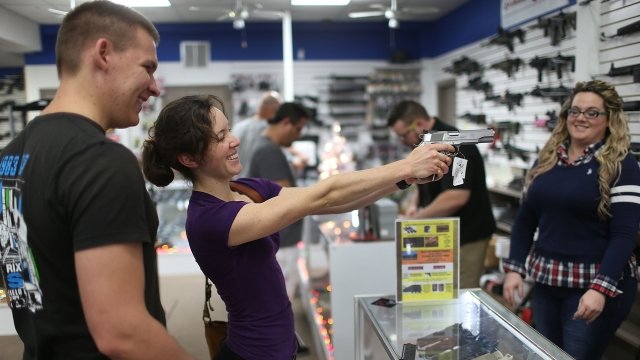 TVs and clothes weren't the only products in demand this Black Friday: For the third year in a row, the shopping holiday set a single-day record for firearm background checks.

USA Today reports the FBI received 203,086 requests for background checks. That's about 17,000 more requests than it received on Black Friday in 2015 and 2016, and both those years were previous record-breakers.

The number of background checks isn't directly linked to the number of guns sold. Analysts note gun sales are likely the higher of the two figures because customers can buy several firearms in one transaction.

Now, the agency has to work quickly. Federal law only gives FBI analysts three business days to find information that could disqualify someone from buying a firearm.

Senators from both parties want to prevent mass shootings — by making states and agencies more vigilant.

But just as the FBI faced greater holiday demand, its background check system was called into question.

Sessions' biggest concerns were military branches and federal agencies not reporting convictions or other potentially disqualifying info to the FBI database, along with false statements on background check request forms.

He directly pointed to the Sutherland Springs church shooting — and the Air Force's failure to report the suspected gunman's prior court-martial — as cause for concern.