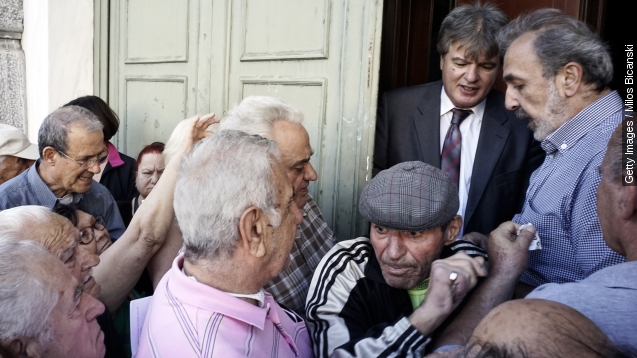 SMS
Bitcoin Looks Very Attractive To Greeks Right Now
By Matt Picht
By Matt Picht
July 4, 2015
In the face of another financial crisis, Greek citizens are looking for alternative places to store their wealth — including digital currencies.
SHOW TRANSCRIPT

As Greece's citizens confront shuttered banks and cashless ATMs, many of them could be thinking the same thing: "Maybe I should have bought Bitcoin."

Advocates say the once-fashionable digital currency is the perfect remedy for Greeks who have been hit hard by the current financial crisis.

Michael Perklin, president of the Cryptocurrency Certification Consortium, told BNN "Millions of Greek citizens have placed the money they earned into their bank accounts, and they simply can't get it back. With Bitcoin, you control your money. Which means that there is no other company or government or bank that can stop you from having access to your money."

Right now, emergency government measures have made it much harder to move money around or out of the Greek financial system. And if the Greek government gets any more desperate, it might abandon the euro standard and revert to printing drachmas — which would almost certainly devalue instantly against the euro.

Since it's not tied to a specific government, Bitcoin faces none of these drawbacks. Greeks who've invested in the currency see it as a relatively safe place for their cash to ride out the current financial crisis; it's a bit like buying gold.

It's too late for Bitcoin to make much of an impact in Greece. The currency is too esoteric for most people to understand, and the ones that do can't buy Bitcoin with euros that are locked up in Greek's banks.

And the digital currency has its own problems: its value is still extremely volatile, and last year's collapse of Bitcoin exchange Mt. Gox created some trust issues with the systems surrounding Bitcoin.

But the Greek crisis is being watched by other weak Eurozone economies like Spain, Italy and Portugal. If one of those countries starts heading for the exit as well, Bitcoin could be the next big thing across Europe.