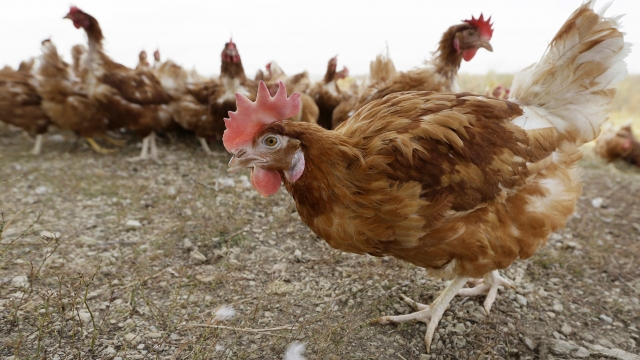 SMS
Bird Flu Spreading Across The Country, Detected In At Least 29 States
By Clayton Sandell
By Clayton Sandell
April 26, 2022
The Department of Agriculture says the bird flu has turned up in commercial and backyard flocks in 29 states, affecting more than 33 million birds.

An outbreak of highly contagious H5N1 bird flu is spreading from farm to table as it moves east to west.

The virus is almost always fatal to birds.

The U.S. Department of Agriculture says the bird flu has turned up in commercial and backyard flocks in 29 states, affecting more than 33 million birds.

"2022 is probably the one of the worst outbreaks we've seen," she said. "And if we don't go in and humanely euthanize the birds, they suffer from the disease. And it's pretty devastating both for us as, of course, veterinarians and the officials that respond — but really challenging for producers and the bird owners themselves."

The virus is spreading thanks mostly to migrating wild birds — waterfowl like ducks and geese. It's also affecting raptors like bald eagles.

"It's challenging. Because the wild birds don't listen to our quarantine orders and they don't pay attention to our boundaries that we tried to put in place," Baldwin continued.

At poultry farms around the country, the watchword is "biosecurity": locking down, cleaning everything with bleach and shooing wild birds away.

"Nothing gets to go outside right now," poultry farmer Nancy Kellner said. "We have a lot of pigeons around here. So if they go in the water puddles and get a drink of water, if they're carrying it on their beak or if they poop in the water, and then if we walk in the puddle it can be brought in."

Experts say the virus does not seem to affect people.

"There's not really a risk to the general public at this point in time and the risk comes in when you are in direct contact with a confirmed infected bird," Baldwin said.

But shoppers are not immune to a jump in egg prices. The wholesale cost of a dozen eggs has tripled in the last few months.