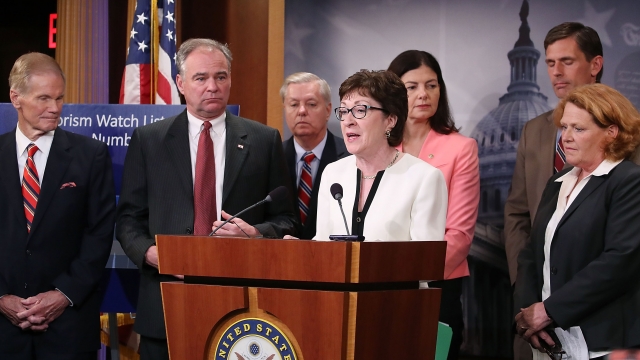 SMS
Bipartisan Measure Breathes New Life Into Gun Control Battle
By Eugene Daniels
By Eugene Daniels
June 21, 2016
The bill adds elements that could help quell fears on a lack of due process in past gun control measures.
SHOW TRANSCRIPT

"Our goal is simple and straightforward. We want to make America safer," Sen. Susan Collins said on Tuesday.

The fight over gun control is looking more bipartisan than it has in a really long time. GOP Sen. Susan Collins has reached across the aisle for the Terrorist Firearms Prevention Act of 2016.

The measure has three main components. First, it would deny gun sales to anyone on the "no-fly" list or selectee list. It also creates an appeals process for U.S. citizens and green card holders who want to buy guns who are on those lists. Finally, it would add a "lookback provision" that would alert the FBI when anyone who has been on those lists within the last five years buys a firearm.

Collins' office says that last provision would've caught the Orlando shooter who was reportedly on the selectee list for 10 months. But like every gun control proposal, this one has a serious uphill battle.

The White House says administration attorneys are taking a look before President Obama decides if he will support it. And even if it passes the Senate, the House hasn't been on board for any new gun control measures.

The bill is similar to two measures which failed Monday in the Senate, despite Democrats taking over the floor for almost 15 hours. But the lookback provision and appeal process could make the bill more palatable for those worried about due process.

And the public is already on board. According to a new CNN/ORC poll, 85 percent polled support banning people on federal watch lists from buying guns.

This video includes clips from C-SPAN and the White House. Music provided courtesy of APM Music.