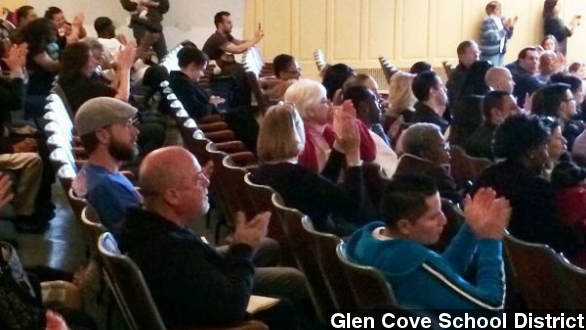 By Erik Shute
April 10, 2014
Singer-songwriter Billy Joel showed up to watch elementary school students perform his songs after parents and the principal asked him to come.
SHOW TRANSCRIPT

“The Piano Man showed up to one elementary school Spring concert. There he is in the lower left hand corner.  The concert they were giving was called the River of Dreams: a Billy Joel Tribute.” (Via WNYW)

The Glen Cove School District “spotted” Joel in the crowd in this photo provided to Newsday.  He sat with awestruck parents and listened to students from Deasy Elementary School perform 15 of his hit songs.

Weeks before, the principal and parents made an effort to reach out to Joel via Facebook and wrote letters asking him to attend.  No one guessed he would show up -- and right before showtime too.

HALL: “There he is. Apparently the school is ten minutes from his home. He arrived on his motorcycle about five minutes before 9:30. The principal said the singer asked to sit in the back so he wouldn't make the kids nervous. That's so cute.”

ROKER: He looked like a proud grandpa! (Via NBC)

The kids might not have been nervous, but concert director and music teacher Rosita Mallo admitted to Newsday,

"I found out two minutes before the concert started that he was here and it totally freaked me out. My nerves went sky-high … This was a very welcomed surprise. It gave the kids extra energy to perform." (Via Newsday)

Sources say after the kindergarten and first graders performed, fans rushed Joel for photos and autographs, so he decided to exit early.

There’s no doubt the kids received the experience of a lifetime, and CBS This Morning says that experience is also a lesson.

“He applauded them at the end and they were all thrilled to see him. A great example of how ‘If you don’t ask, you don’t get.’" (Via CBS)

That’s true. In March of last year, a video of Long Island student Michael Pollack playing piano for Billy Joel went viral.  WCBS says Pollack, who was in the crowd, simply asked Joel if he could play with him and the singer didn’t hesitate to say “ok."

We’re sure this won’t be the last of Billy Joel’s surprises.