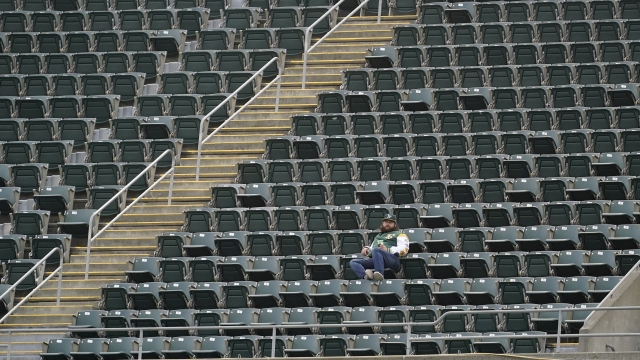 SMS
Billions Of Taxpayer Dollars Are Funding Privately Run Sports Stadiums
By Newsy Staff
By Newsy Staff
July 11, 2022
In "In The Loop: Scoreboard," Christian Bryant looks into the common, yet confusing, practice of taxpayer-funded sports venues.

Sports stadiums and arenas can cost hundreds of millions, even over a billion, dollars. Then, they stand to make teams and their owners a lot of money.

Yet, many of those sports venues are paid for with taxpayer money: public subsidy for a private enterprise. It's a story on how billions of American tax dollars are being spent on buildings that sit empty most of the year and that you might not even be able to afford to enter.

Sports owners around the country have pushed for public subsidies for their team’s stadiums and arenas, arguing they provide a significant boost to the local economy.

But do they really, and are they worth it in the end?

Taxpayer funding of sports venues is common, with billions of dollars in subsidies funding the construction or renovation of dozens of facilities operated by professional sports teams.

Out of the 124 teams in the four largest North American professional sports leagues, the vast majority play in venues either built using public funds or that were taxpayer-subsidized in some way. It can lead to large amounts of money paid from local governments to teams.

The National Football League’s Buffalo Bills are staying in the Buffalo suburb of Orchard Park thanks to a deal reached earlier this year to build a taxpayer subsidized stadium in the same spot where the Bills play now. Out of $1.4 billion in costs, $850 million of that will come from state and local funds.

The newest Major League Baseball stadium, Globe Life Field in Texas, came to be thanks to a deal giving $500 million investment of public funds to the team plus all the rights to admissions and parking tickets.

For the record, voters tend to approve these changes, but that might have something to do with how arguments in favor of stadiums are presented.

Teams’ arguments for public funding often rely on the idea that it will generate money and business in a neighborhood, city or state.

If you as a taxpayer provide money for a stadium, the thought is that people locally and from outside the area will come in, and the stadium would pay for itself by boosting the economy.

It’s an idea that relies on the economic principle of the multiplier, assuming that more dollars spent there will boost local incomes and lead to people spending more money locally.

"Before something is built, somebody — a consultant, an analyst — sits down and they say, 'Okay, I think there'll be this many people, and I think they'll spend this much money and this much will be sales tax,'" said Nola Agha, field professor of sports management at the University of San Francisco. "We do some multiplication... and we come up with some really big number of the hundreds of millions of dollars of impact that this property is going to have."

But there’s a caveat there: All of this is being done before anything is built, and before any games are played, so, the math can get a bit fuzzy.

"You can imagine that there's lots of assumptions that go into that, and the people that do these before the fact are hired generally by either the league or the team or the sporting body," Agha said. "So they have some incentives, let's say, to maybe push the boundaries of those assumptions that they're making."

Victor Matheson, an economics professor at the College of the Holy Cross who specializes in studying the economic impact of sports, says there are a couple of issues with those assumptions.

First of all, the business of sports is smaller than we think it is.

"As it turns out, professional sports is actually a pretty small business when it comes down to just direct dollars and cents," Matheson said. "The biggest and richest and most successful league in the entire world, the NFL, generates revenues approximately the same as Sherwin-Williams paint stores."

If you pulled a sports team out of a city entirely, where do those revenues go? It turns out it's not all that far.

"They're generating $400 million of revenue every year, but that team disappears," Mathesons said. "What happens to the local economy? Does it fall by $400 million? Actually, it falls... significantly less than that because people will figure out some other way to spend their entertainment dollars in the absence of an NFL team."

Stadium subsidy opponents warn that that cycle teams promote ends up looking slightly different than advertised, with taxpayer money just going into owners’ pockets when it could have been used to fund local projects.

So, which side has it right here?

The numbers seem to show most of stadium funding is a subsidy that heads straight to wealthy owners. Sports economist Michael Leeds at Temple University studied the effects, doing a study looking specifically at Chicago sports teams. He found that a sports team doesn’t have the impact on a city that you’d think.

Although cities are getting about the same return from, say, a Macy’s as a stadium, why does it look like there’s so much more gain, or as if whole neighborhoods have been turned around by stadium construction?

"If you look at examples of fans who go to a new ballpark and they see all this development around them — they're seeing the additions, they're seeing the gain — it's very conspicuous," Agha said. "What they don't see is the loss. So on the other side of town, maybe a whole bunch of businesses have gone out of business because more people are spending their their beer money closer to the ball."

So, what advantages do team owners have?

For one, they own the team. Majorities of Americans consider themselves sports fans, and wherever you are in the country, you probably don’t have to look very far to find people who are incredibly dedicated to their teams.

And the owners have money. Wealthy owners and developers have the power to donate to pro-stadium officials, as evident before the building of the Los Angeles Rams’ privately-funded home of SoFi Stadium in Inglewood, California.

Although there was a lull in public funding requests in the aftermath of the 2008 recession, teams have been back asking for public funds a lot lately.

The Washington Commanders are hoping to get $350 million in funding from Virginia to build a new football stadium there. Maryland, where their current stadium is, offered money to develop the area around it but refused to give the Commanders any money for a new stadium. Virginia tabled a bill on the issue in June, putting the debate on pause until at least next year.

The Carolina Panthers football team ended a project already under construction to build an $800 million training facility after the town of Rock Hill, South Carolina didn’t pay over $200 million for local public infrastructure.

The Atlanta Braves, five years after building a stadium with $300 million in funds, are asking local officials in Cobb County, Georgia to give them $200 million more in tax breaks to build an office building next door.