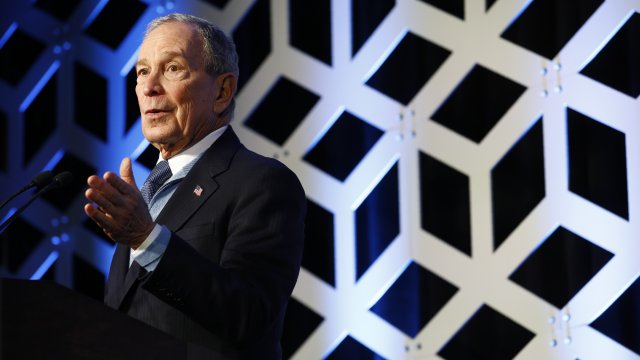 By Alexandra Miller
February 27, 2020
Former NYC Mayor Michael Bloomberg and entrepreneur Tom Steyer, who is no longer in the race, have spent nearly $100 million combined on ads in CA.
SHOW TRANSCRIPT

Senator Bernie Sanders is expected to earn a major portion of California's 415 delegates on Super Tuesday despite being significantly outspent in advertising. Democrats have spent a whopping $95 million on television and radio ads in the state ahead of the March 3rd primary, the most in the nation, and nearly $15 million more than second place Iowa.

According to Kantar Media, which tracks political ad spending, most of that money is being spent by just two candidates. Former New York City Mayor Mike Bloomberg has spent almost $52 million on ads in California and entrepreneur Tom Steyer is close behind at about $36 million. Steyer dropped out of the race Saturday after a poor showing in South Carolina. Sanders is the only other major candidate spending money, but he's only poured about $7 million into the state.

Bloomberg and Steyer also account for most of the ad buys on Facebook too, according to a Newsy analysis of digital ad spending data. Of the 12 million dollars spent on Facebook in California in the last 90 days, nine million came from those two campaigns.

Take all the spending so far on TV, radio and online, Bloomberg and Steyer have together shelled out nearly $100 million dollars in California.

With Steyer out, the big problem for Bloomberg is that if the latest opinion polls hold true on Super Tuesday, he may not reach the 15% threshold needed to win any delegates at all.