Senator Looks To Require Reporting of Contact with Foreign Agents 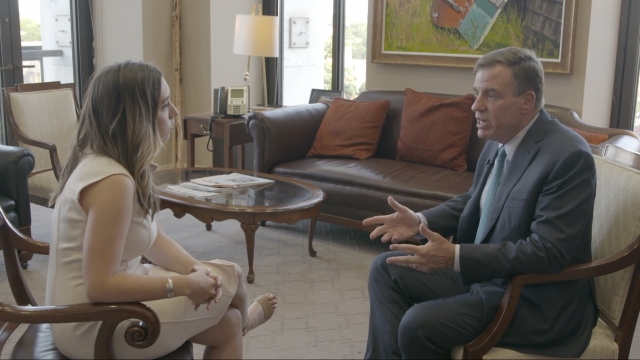 "The Russians were pretty darn effective with a small amount of money in sowing dissension in our campaign and manipulating people's opinions," said Sen. Mark Warner.

As the presidential campaign gets underway, there are urgent questions about how to prevent more interference.  Warner, the vice chair on the intelligence committee, says part of it is putting the onus on the actual campaigns.

Warner says during 2016, there were more than 140 contacts from Russians to Trump campaign or business officials. While he accepts Mueller's conclusion that these interactions didn't constitute conspiracy, he wants to make sure it doesn't happen again.

"Going forward we have to make sure that there's an obligation if any campaign receives an offer of assistance or an offer of interference or a political donation from a foreign agent there ought to be an obligation to tell law enforcement," Warner said.

Warner's bill requires any campaign official who receives information, money or any thing else of value from a foreign agent to report it, within a week, to the Federal Elections Commission and the FBI. In 2016, then-Trump Campaign Chairman Paul Manafort shared internal polling data with the Russians.

"If this law was in place, someone in the campaign would have been obligated to report that to the FBI," said Warner.

Warner hopes his bill would give clear direction to campaigns on how to respond to similar issues. Rather than just “hoping” for the best this would “require” reporting. So far none of Warner’s committee colleagues have signed on to the bill.

Federal Election Officials are preparing for cybersecurity issues in the upcoming election… The Commission said Wednesday it will create a new program that will allow both presidential and congressional campaigns to learn how to prevent hacking.

The program will be privately funded and will work specifically to counter foreign threats. Donors will be disclosed monthly; foreign donations are forbidden.

FEC Chair Ellen Weintraub said in a statement on Twitter: "The Commission’s decision will get urgently needed cybersecurity aid in the hands of federal campaigns to help protect against foreign & domestic hackers."