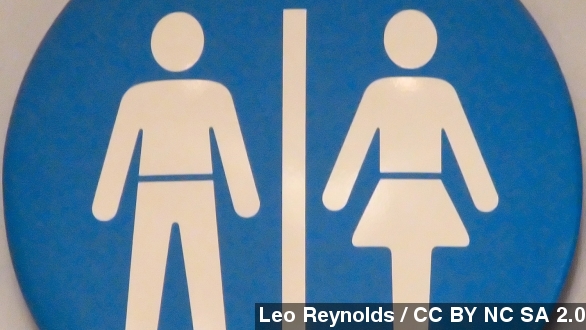 SMS
Bill Requiring ID For Bathroom Use Passes Fla. Subcommittee
By Christina Hartman
By Christina Hartman
March 5, 2015
A Florida House bill would require transgender people to produce a license or passport proving their legal gender in order to use public bathroom.
SHOW TRANSCRIPT

"I think this is the last straw. I can't use the bathroom? … They're going to have to arrest me," transgender woman Esme Russell told our partners at WFTS.

"You all just don't get it. I'm so scared of all of you. You can put me in jail for being me," Cindy Sullivan said in testimony against the bill.

"This is is about common sense and trying to protect young ladies from men who are aggressive," said John Sternberger, president of the Florida Family Policy Council.

In Florida, a bill that would keep people from using a bathroom, locker room or dressing room designated for the opposite sex passed a state House subcommittee.

Now, there's a lot ahead for the bill to become law — this is just a first step — but the legislation requires transgender people specifically to produce a license or passport that proves their legal gender.

Its co-sponsors say people using public restrooms have "an expectation of privacy" and "reasonably expect not to be exposed to individuals of the other sex."

But transgender people say bathrooms have become a place of increased vulnerability for them, too.

"The bathroom is often the start of trans people experiencing violence in the rest of the world. … You hear of trans women who’ve been viciously beaten," activist Drian Juarez told BuzzFeed.

The bill’s Republican sponsor, Representative Frank Artiles, says the bill is designed to protect everyone against crimes like molestation, rape, voyeurism and exhibitionism.

It's not a new debate, one depicted by the likes of the Amazon series "Transparent."

"There are young women in here that you are traumatizing. … Your father is a pervert," says a character from the show.

"He told me, 'No, you can't go because you are a man, not a woman,'" Giselle De La Rosa told our partners at KGTV.

And one debated in legislatures across the country.

“Someone being of male gender status would be allowed to shower nakedly one foot away from my daughter and my wife,” a man testified to the Cleveland City Council in late 2014. (Video via WEWS)

And owners of businesses and schools might have cause for concern: The bill could make them liable if someone uses the wrong bathroom.

Several states are considering or have grappled with similar legislation, including Arizona, California and Kentucky.