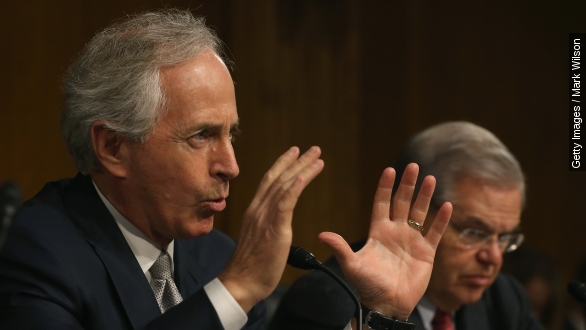 "Congress put in place these sanctions, as you know well. We're the ones who brought Iran to the table," Sen. Bob Corker told MSNBC.

That was Sen. Bob Corker making the case Tuesday to give Congress oversight on any nuclear deal with Iran.

The bill, approved by the Senate Foreign Relations Committee Tuesday, gives Congress 52 days to look through an agreement and decide whether to lift sanctions on Iran.

Corker and his colleagues have been pushing for Congress to have a say in the deal throughout the extensive negotiations. (Video via Office of Sen. Bob Corker)

The Senate Committee on Foreign Relations is scheduled to take up the bill Tuesday afternoon, and Corker says it could get bipartisan support.

And the bill got an unexpected boost Tuesday — from the president. Shortly before it passed through committee, Obama said he'd approve the bill as an acceptable compromise. (Video via The White House)

It already had eight Democratic co-sponsors and an independent who caucuses with the Democrats. That support put the bill close to a veto-proof majority. (Video via NBC)

Congress hasn't been privy to the details of the framework deal, which the Obama administration has said are still being worked out.

"The international community has agreed to provide Iran with relief from certain sanctions, our own sanctions and sanctions imposed by the United Nations Security Council," the president said.

The plan has drawn criticism from lawmakers, who can pull the plug on a potential deal by voting to stop the president from lifting congressional sanctions. (Video via C-SPAN)

Republicans like Tom Cotton and John Boehner have tried to insert Congress into the negotiations, with Cotton penning a letter to Iran's leadership and Boehner inviting Israeli Prime Minister Benjamin Netanyahu to decry the deal before Congress. (Video via CBS, PBS)