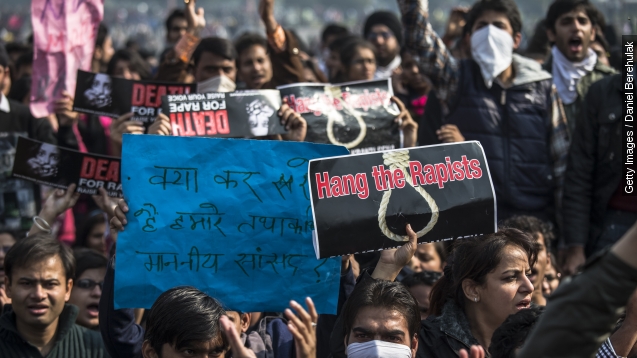 SMS
Bill Fails To Prevent Juvenile Rapist's Release In India
By Melissa Prax
By Melissa Prax
December 20, 2015
One of the convicted rapists and murderers in the 2012 Nirbhaya gang rape case was released amid protests in Delhi.
SHOW TRANSCRIPT

One of the people convicted for the Nirbhaya gang rape case was released on Sunday after serving his three-year term — the maximum term for minors in India.

The 2012 gang rape and murder of Jyoti Singh brought attention to sexual violence against women in Indian society. It was also the subject of a BBC documentary that was banned in India.

Protesters gathered in Delhi on Sunday, including Singh's parents.

The minor is now free due to his age — unlike some of the other accomplices who received the death penalty. (Video via Al Jazeera)

A failed Indian Congressional bill could have changed his sentence.

"For me, all that is important is that we struggled for three years, and we failed, and we didn't get justice, and the culprit is being let go today," Singh's mother Asha Devi said.

Had the bill passed, the Juvenile Justice Amendment Act would have allowed a board to review cases individually and decide whether the minor should be treated as an adult or stay longer in a juvenile detention center. (Video via India TV)

This video includes images from Getty Images and Ramesh Lalwani / CC BY SA 2.0.