The Peace Corps Has A Sexual Assault Problem. A New Bill Could Help. 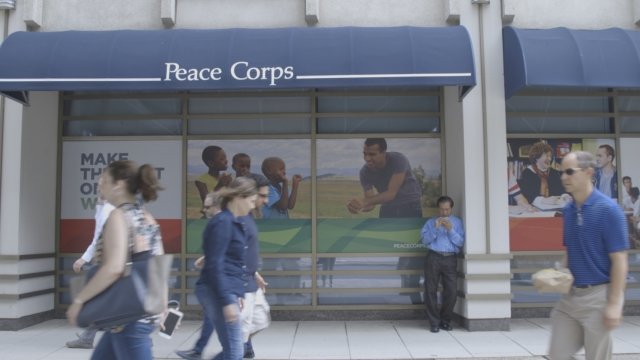 "My Peace Corps experience was a dream that became a nightmare," says Mary Kate Shannon, who was volunteering with women and children in Peru in 2011 when she says she was attacked and raped by a total stranger.

"It was one of those things that kind of came out of nowhere," she said. "I got into a taxi to go home and I told him to take take me to my house. Instead, he ended up taking me to an abandoned area not far from a prison, and he ended up raping me in the back of a taxi."

Shannon is not alone. Thirty-eight percent of female volunteers said they suffered a sexual assault in an anonymous internal survey taken in 2016.

The Peace Corps declined an interview with Newsy and referred us instead to a January statement released in response to a CBS News report alleging that the agency is failing to protect volunteers.

The Peace Corps said the report "grossly mischaracterizes the tremendous progress the Peace Corps has made to both help prevent and address sexual assaults when they occur," and it argued most respondents in the 2016 survey experienced only "non-aggravated" sexual assaults.

Shannon reported her sexual assault, and her attacker was eventually prosecuted and sent to prison. But a little over a year later, she was raped again.

Shannon was ultimately sent home. Back in the U.S., no one would take her health insurance provided through the Department of Labor, leaving her to recover from her trauma alone.

"You know, surviving a rape is one thing. But it's everything after that that is hard. It's the nightmares. It's the constantly living your life in fear," she said. "When I realize what was going to happen with the taxi driver, I thought, 'Well as long as I don't die, then I'll have to live with what happened.' But I remember after getting back from the Peace Corps… there was a point in my recovery where I felt like, I kind of wish I had."

Megan Riethmiller told Newsy she was assaulted in Uganda in 2015, shortly after arriving in the country.

"It was my first day of teaching, actually. After my classes, a coworker of mine wanted to bring a gift over. And my coworker was the school priest, so he asked me to say a prayer or a blessing over my house, which I thought was very nice of him to do so, and then after a few moments of that, that's when my sexual assault occurred," she said.

Riethmiller reported the assault and received counseling. But when she asked for more counseling later in her service, she didn't get the help she needed.

"I was told that I had to come in because they need to see if I was fit to be a volunteer still," she recalled.

But Riethmileer was sent home before she could have that meeting, after suffering a foot injury. Just like Shannon, Riethmiller couldn't find a provider who would accept her health insurance, and she says she got no help from the Peace Corps.

"A lot of us are forgotten," she said. "Once you sign your papers and you step foot in the United States, you're pretty much no longer Peace Corps' problem."

Now Congress is considering another bill from Rep. Poe requiring the Peace Corps to do even more to prevent and respond to sexual assault and to help former volunteers get medical and mental health treatment.

"Now the Peace Corps cannot just turn their head and ignore this. They have to be involved," Poe told Newsy.

The bill, which passed unanimously in the House, requires the Peace Corps to provide training to volunteers before they travel abroad about the crime and health risks they may face in certain countries.

"Give them the risks, let them make up their mind if they still want to go to that particular country or if they want to do their service in some other country," Poe said.

The Peace Corp told Newsy in a statement that it supports Poe's bill, saying it will "codify best practices to help keep Volunteers safe and hold the agency accountable to taxpayers and Congress."

Kellie Greene, who was the first director of the Peace Corps Office of Victims Advocacy and whose 2015 whistleblower complaint prompted the letter from the Office of Special Counsel, said the training reforms in the new bill will help volunteers and shift global cultural perceptions around sexual assault.

"You're starting to change the belief system in those countries of how you should be addressing women and girls, and, you know, talking about 'good touch bad touch,' all of those things that we teach our kids today," Green said.

But when asked what the new bill will do to help volunteers get access to health care, she said, "not much."

The new bill, which is expected to pass in the Senate, gives former volunteers access to health care for 120 days while they wait for the Department of Labor to approve their disability claims, something volunteers say takes months.

A spokeswoman for Poe said this is another issue in the Peace Corps that is "ripe for reform" and said Poe plans to work with other members of Congress to solve the problem in future legislation. Poe is retiring at the end of this year.

"I don't think the bill went far enough on that aspect," Riethmiller said. "That's something we're still going to work towards."