Bill Clinton Gets Testy When Confronted With Crime Bill Legacy 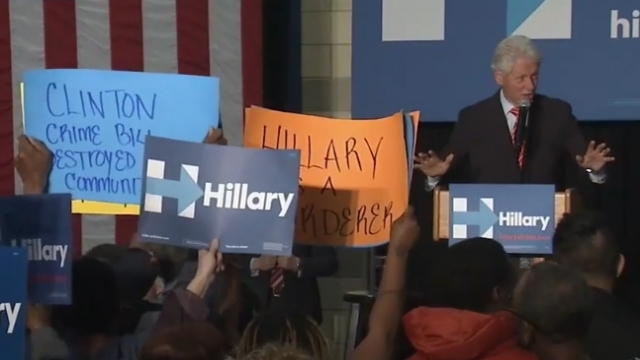 SMS
Bill Clinton Gets Testy When Confronted With Crime Bill Legacy
By Eugene Daniels
By Eugene Daniels
April 7, 2016
Clinton's 1994 crime bill continues to pop up as an issue in his wife's presidential bid.
SHOW TRANSCRIPT

While stumping for his wife, President Bill Clinton got into a pretty intense discussion with Black Lives Matter protesters about the impact of his 1994 crime bill.

"You are defending the people who kill the lives you say matter. Tell the truth," Clinton told a crowd Thursday.

The former president explained how high crime was when he took office, arguing the Violent Crime Control and Law Enforcement Act lowered crime rates in America and had bipartisan support.

And he drew a line when the protesters tied his wife to the passage of the bill, saying the former first lady "didn't vote for that bill because she wasn't in the Senate." That's true, but she did publicly champion the bill to help her husband get it passed. Clinton did bring up the fact his wife's opponent, Sen. Bernie Sanders, voted for the bill.

Both of the Clintons have been questioned during the presidential campaign by protesters who say the bill disproportionately impacted blacks. And last July, Bill Clinton admitted the law made the issue of mass incarceration worse, saying, "I signed a bill that made the problem worse, and I want to admit it."

Despite the protesters, the Clinton family remains very popular among black voters. Throughout the primary, Hillary Clinton has fared better in states with a more diverse voting population.

Bill Clinton eventually moved the discussion back to the current election, saying, "This election is about the future. They're trying to blame her for something she didn't do."

This video includes images from Getty Images and clips from C-SPAN and NAACP.