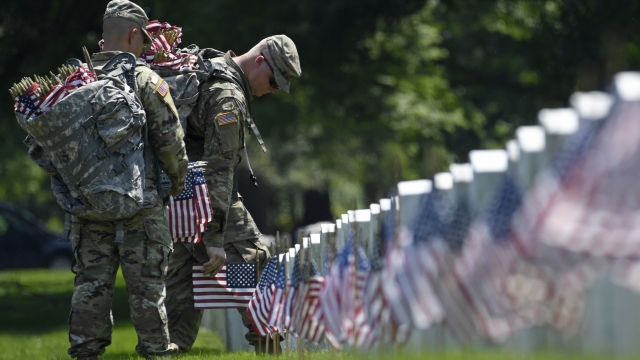 Just over 3,500 veterans have died from COVID-19, but as it stands their families would lose survivor benefits even if the vet had a service-related condition. One member of congress, who is a former army officer, wants to change that.

"Every veteran would want to know that their family members were cared for just as if they would would have could they have survived," Rep. Warren Davidson said.

Rep. Warren Davidson says "the ensuring survivors benefits during COVID-19 act" would address cases where veterans got the coronavirus but their service injuries made them more vulnerable to dying from it. The act would require the department of veterans affairs to obtain a second opinion to determine if a former military member with a service-connected disability died from COVID-19. But this would only apply if the death certificate does not clearly identify the veterans service-connected disability as the cause of death.

"The COVID-19 alone is very survivable. But when you have the underlying comorbidities, it puts people at greater risk. In the case of veterans with service connected disabilities, they clearly have comorbidities," Davidson said.

Dependents often qualify for health care, life insurance and money for college or burial expenses. But only if the veteran dies from their service-related injury or illness, which currently does not include COVID-19.

In July, a similar bill was introduced by senators Thom Tillis and Kyrsten Sinema after Sinema spoke to veteran advocates in Arizona. Davidson says he and his legislative team had the honor of picking up the Sinema and Tillis’ bill in the house, which has received bi-partisan support from seven members of congress.

"When survivors deal with this, it's already traumatic for the family, the last thing they need to wrestle with is, you know, months years or in some cases, decade long path to really get what the veteran in their lifetime already earned," Davidson said.

"The ensuring survivors benefits during COVID-19 act" is being reviewed by the committee on veterans' affairs. Davidson says he hopes it will be taken up in November after the election.