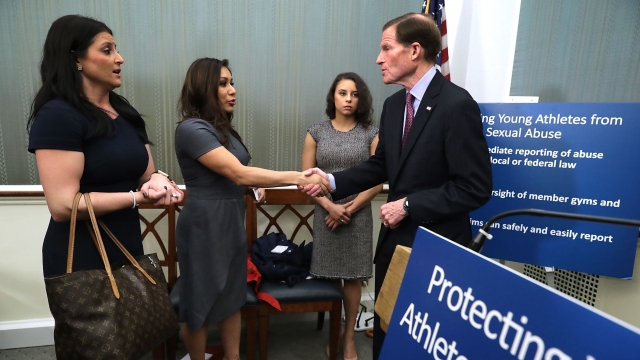 SMS
Senate Wants To Protect Athletes In Fallout Of Nassar Abuse Cases
By Peter Hecht
By Peter Hecht
July 30, 2019
The bill would make sports governing bodies legally liable for failing to report abuse by doctors or coaches, among other measures.
SHOW TRANSCRIPT

Nassar, the former team doctor for USA Gymnastics, was sentenced to up to 175 years in prison last year for sexual abuse. More than 300 women and girls accused him of sexual misconduct. A procession of women, including Olympic medalists, testified at his trial on the abuse they suffered under his medical supervision.

This week, a Senate subcommittee announced it would introduce the Empowering Olympic and Amateur Athletes Act of 2019.

The legislation aims to make sports governing bodies legally liable for failing to report abuse by doctors, coaches or other employees. It would also require the United States Olympic and Paralympic Committee to contribute $20 million a year to an independent group that advocates for athletes reporting physical, mental or sexual abuse.

The proposal follows an 18-month committee investigation that faulted the FBI, the U.S. Olympic Committee, USA Gymnastics and Michigan State University for failing to stop Nassar despite knowing about allegations against him.

An independent analysis commissioned by U.S. Olympic officials found much of the same thing. In that report, released in December, an outside law firm found Nassar's conduct continued as "numerous institutions and individuals enabled his abuse and failed to stop him."

It said: "These institutions and individuals ignored red flags, failed to recognized textbook grooming behaviors, or in some egregious instances, dismissed clear calls for help from girls and young women."

Republican Sen. Jerry Moran, the Senate subcommittee's co-chair, told NBC that "terrible things happened" but that "almost without exception," authorities failed to respond. And Democratic co-chair Sen. Richard Blumenthal said Nassar "was far from a lone wolf" because "he was enabled by others" who failed to stop him.

In December, the U.S. Olympic Committee formally apologized for Nassar's crimes to sexual abuse survivors and their families. It announced new leadership and reforms meant to QUOTE "create a more safe and supportive training environment for its athletes."