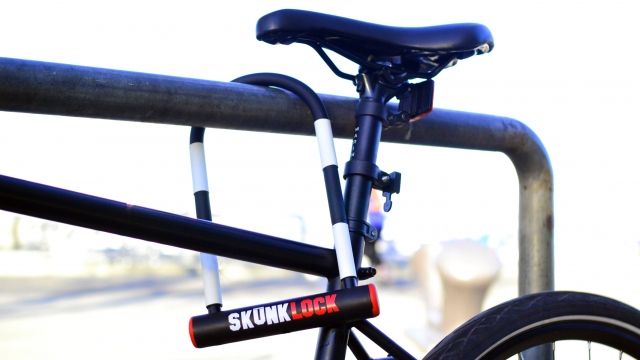 It would really stink to get caught stealing a bike with this lock. No, really.

Introducing the SkunkLock — a bicycle lock that releases a nasty smell if you try to break, cut or saw it off.

The idea behind the lock is pretty simple.

"Let's pressurize a unique chemical compound into the lock that bursts if the lock is compromised," said Daniel Idzkowski, one of the SkunkLock's creators.

The SkunkLock's founders claim the stench is so foul, it can make the would-be thief lose their lunch.

But at the very least, the creators hope it will shock them into running off without your bike, moped or scooter.

SEE MORE: Hop Back On That Bike: Cycling Could Lower Your Type 2 Diabetes Risk

The SkunkLock hasn't been tested on any actual thieves yet. But the inventors and a couple of brave volunteers have unleashed the compound on themselves and concluded the smell is "absolutely vomit-inducing in 99 percent of people."

The gas apparently induces effects similar to pepper spray — but a whole lot stinkier. The founders say their chemical is legal and has passed compliance tests.

Users don't have to worry about the stench leaking out during normal use.

The SkunkLock's chemicals are safely sealed in a secure, hollow chamber inside the lock. The only way to let them loose is to cut through the metal.

As a review from Digital Trends points out, the SkunkLock won't guarantee that your bike won't get swiped, "... but it should cause a real scene if someone does try to nab it."

These smelly bike security systems aren't available to consumers yet. But you can pledge $99 to the SkunkLock's Indiegogo fund, which will get you one by June 2017.