Biggest Fight Of Debate Night: Candidates Vs. The Media 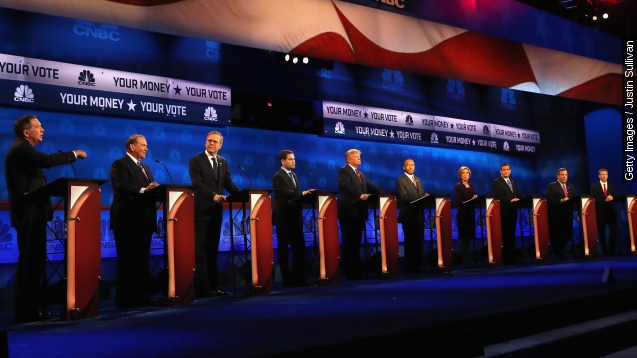 Some of the biggest fights of the third Republican debate were between the candidates ... and the media.

In response to the Florida Sun Sentinel's op-ed calling for his resignation, Sen. Marco Rubio said: "I read that editorial today with a great amusement. It's actually evidence of the bias that exists in the American media today." (Video via CNBC)

At another point in the debate, Sen. Ted Cruz remarked on "the contrast with the Democrat debate where every fawning question from the media was, 'Which of you is more handsome and wise?'"

And Rubio commented, "the Democrats have the ultimate Super PAC, and it's called the mainstream media."

When Carl Quintanilla asked about Republican candidate Ben Carson's relationship with a nutritional supplement company, Carson said, "If somebody put me on their home page, they did it without my permission."

"Does that not speak to your vetting process or judgment in any way?" Quintanilla asked.

And attacking the media is a good strategy: Trust in media is at an all-time low.