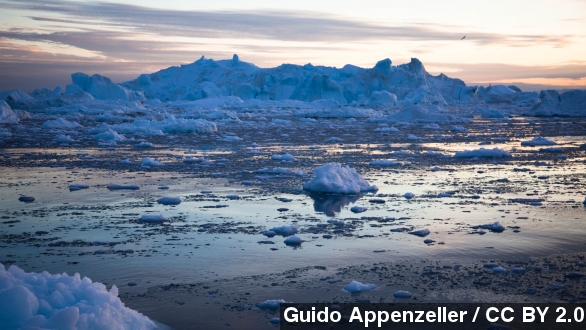 By Sebastian Martinez
July 30, 2014
Big waves in parts of the Arctic Ocean are unprecedented, mainly because they used to be covered in ice.
SHOW TRANSCRIPT

​​Parts of the Arctic Ocean are seeing bigger waves than they've ever seen before — mainly because they used to be covered in ice. (Via ​Guido Appenzeller / CC BY 2.0)

The Washington Post reports, "Researchers have now measured swells of more than 16 feet in the Arctic's Beaufort Sea, just north of Alaska."

​That poses a big threat because it could compound the already accelerated rate of Arctic sea ice breakup. (Via Submarine Deluxe / "Chasing Ice")

"As the sea ice retreats, you start to transfer that heat in that ocean water onto the land and you increase the thawing rate and you release that methane you're talking about." (Via CNN)

The Post article cited a report published by the scientists who measured the waves. They also note, "It is possible that the increased wave activity will be the feedback mechanism which drives the Arctic system toward an ice-free summer." (Via Geophysical Research Letters)

As with all things climate change, a single factor, like an ice-free Arctic summer, can cause a domino effect with wide-ranging consequences for the human race.

As The Guardian reports: "Some research has pointed out a link between the warming Arctic and changes in the jet stream, contributing to unprecedented weather extremes over the last few years. These extreme events in turn have dramatically impacted crop production in key food basket regions."

​That report that's being cited in most articles on the Arctic waves was published back in May, so it's fair to ask why, with such serious potential consequences, it hasn't received a lot of media coverage until now. (Via Nature World News, MarineLink, The News Ledge)

Well, given the recent crisis in Ukraine, and then the fighting in Gaza, it seems like coverage of climate change issues like the Arctic waves has been somewhat overshadowed. (Via The Telegraph, Fox News)

But despite the bleak outlook, the BBC managed to find a potential silver lining.

​"There's a realistic possibility ships could travel for about 60 days a year across the north of Russia, opening a faster, cheaper shipping route from the East to the West."

We're currently in the middle of the Arctic's melt season — a period of increased ice breakup — which lasts until the fall.