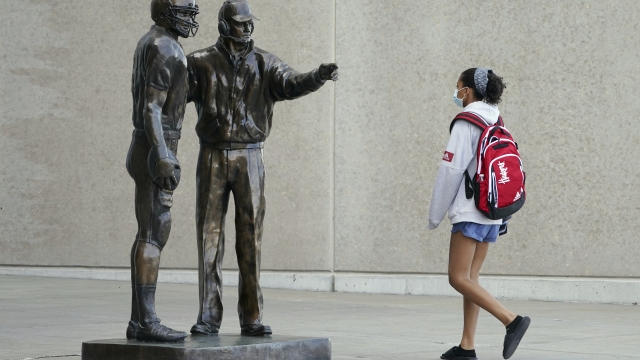 "We can handle it. And that's the challenge that we're under right now. What do you want exactly?""We want to give you something to hope for. We want to reward your sacrifice!"

This was message from the practice field for the Ohio State Buckeyes in August as the legendary Big Ten Conference debated the safety of playing the 2020 college football season amid a global pandemic.

The Buckeyes wanted to play. But Ohio State was one of only three schools among the conference's now-14 universities to vote to have a fall season.

On Wednesday, the Big Ten announced that football is coming back. It said an eight-game season will begin on Oct. 23, with a conference championship game on Dec. 19.

Big Ten officials said Wednesday that their attitudes evolved on the safety of holding the season. They cited new protocols for rapid-result COVID-19 testing that will be made available, starting Sept. 30, for players, coaches, and staff.

When the fall season was canceled on Aug. 11, officials cited concerns over long-term risks for players. Those included worries about a potential COVID-19 side-effect — myocarditis or inflammation of the heart.

"Obviously, there will never be zero risk. But I think it can be done relatively safely."

Dr. H. Dele Davies is an infectious disease specialist at the University of Nebraska Medical Center. He told Newsy last month the game can be played with precautions on the field and strict social distancing measures off the field, though risks remain.

"The age group that the football players are is a very low risk for dying.  But we are seeing a lot of young people who are getting [infected] and they are getting complications that I would say right now we don't even know the full extent of the long-term consequences."

But Northwestern president Morton Schapiro says new protocols helped make it safe for football. Those include programs for cardiac evaluations and strict rules prohibiting playing or practicing for at least 21 days after a positive COVID-19 test.

So the Big Ten will join three other power conferences — the Southeastern Conference, the Atlantic Coast Conference and the Big 12 — in returning to football.

The remaining major holdout is the Pacific 12 Conference — because state officials in California and Oregon have yet to declare that it is safe to play amid the pandemic.