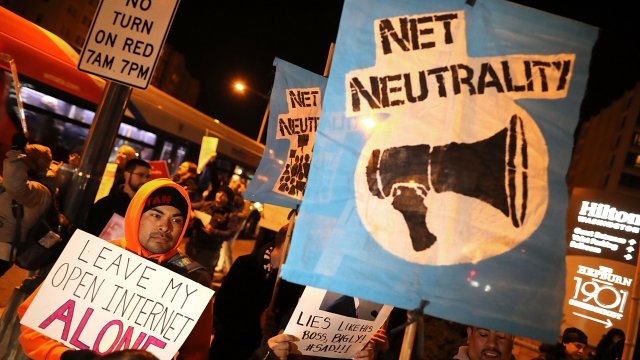 A lobbying group that represents a number of internet bigwigs argues the FCC decision goes against what the majority of Americans want.

Tech giants are joining the fight to keep net neutrality.

The Federal Communications Commission published its final rules for repealing net neutrality on Thursday. A day later, the Internet Association, a D.C.-based lobbying group that represents bigwigs like Netflix, Amazon, Twitter and Facebook, announced it will join the imminent legal battle challenging them.

IA argues the decision to roll back net neutrality protections goes against what the majority of Americans want and that it doesn't protect a free and open internet.

That's because repealing net neutrality protections could give internet service providers the power to police the web. Which means big companies — like those in IA — could be forced to pay more for faster running speeds.

We've still got a little time before the looming legal crusade. No one can file suit until the rules are published in the Federal Register, thereby going into full effect.

Netflix tweeted IA's announcement, telling the FCC, "We will see you in court."