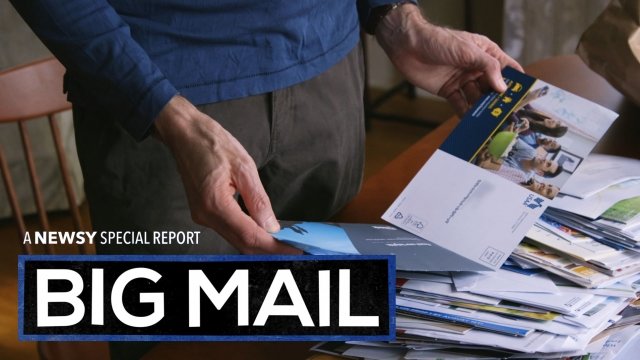 This special report shows the data-driven system that keeps junk mail flowing into your mailbox. That system is powered by an industry that uses data to target consumers. "Big Mail" looks at the impacts of mail scams that use personal information to target vulnerable people. Meanwhile, lawmakers grapple with how to regulate the industry selling that data.

In 2016, the Department of Justice along with federal investigators announced a crackdown of global mail fraud schemes that mostly targeted seniors.

According to multiple court filings, federal investigators provided evidence that scammers used the USPS marketing mail system along with information from data brokers to target their victims.

One of the biggest cases involved direct mailers from Switzerland and Singapore, a data broker in Connecticut, a printer in India, a payment collector in the Netherlands and a payment processor in Canada.

Federal investigators recovered letters other elder victims sent to the scammers. The identities of the letters were redacted, but Newsy was able to compile profiles with clues from the letters and evidence in court filings. For this report, senior volunteers from The Bluffs, Colony Pointe and Lake George nursing homes in Columbia, Mo., read excerpts of the letters out loud.

Consumer protection laws in the U.S. are sectoral and revolve around specific uses of sensitive data.

In 2014, the Federal Trade Commission advised Congress to give consumers more control of their data in a report that looked at nine different data brokers and their practices.

Xenia Boone is the general counsel at the Data & Marketing Association. The DMA is the top industry group for data-driven marketing. It leads industry efforts to self-regulate on issues of privacy.

This spring, Vermont became the first state to crack down on data use and collection. It became a battleground for the national debate over data brokers.

Vermont's law eliminates credit freezing fees, makes it illegal for personal information to be used for fraud, establishes minimum data security standards, defines what a data broker is and requires them to register with the state as well as provide information about their practices.

On May 22, 2018, Vermont became the first state to enact data broker legislation.