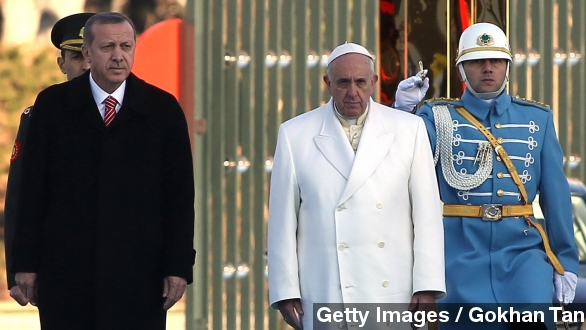 It’s a tall order: Pope Francis is in Turkey — hoping to serve as a counterweight — a voice of tolerance and reason — to ISIS brutality in neighboring Iraq and Syria.

Christian and other religious minorities have fled their homes. You’re looking at refugees from an ancient Christian community near ISIS-controlled Mosul.

“There is no safe place left in Iraq,” refugee Firas Ammar told RT earlier this year.

So nearby Turkey — which is a predominantly Muslim country with a tiny Christian population— is where Pope Francis will be for the next three days in a trip that you could argue also has political goals.

He met with Turkey’s President Recep Tayyip Erdogan — whose country is now home to 1.6 million refugees and faces the threat of ISIS advancement.

But it goes both ways. While Francis calls for religious tolerance, Turkey’s Hurriyet notes President Erdogan will appeal to the west to evaluate what he calls its “Islamophobia.”

He actually asked to visit refugees near the border, but Turkish officials advised against it for security reasons. So — like we said earlier — a tall order for the pontiff — but one NPR is optimistic about.

The outlet’s Sylvia Poggioli reports Francis has “a great deal of credibility” in the Muslim world.

That’s because — Poggioli points out — he’s spoken out against military action in Syria. Though that was last year.

This year, he’s stayed largely — and for critics — conspicuously silent.

Still, his visit to Turkey sends a serious message. He’s only the fourth pope to visit there.