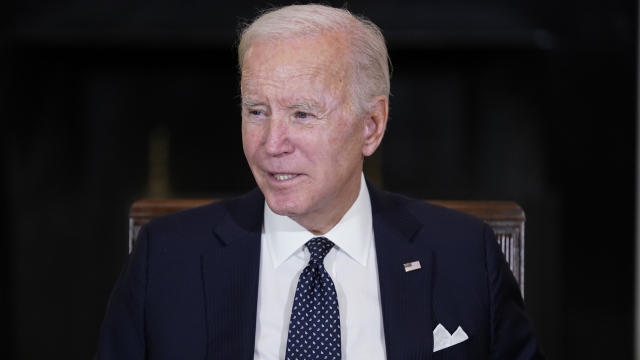 President Biden is traveling to New York on Thursday, to Philadelphia on Friday and scheduled to headline a political rally Tuesday in Florida.

President Joe Biden is zeroing in on a largely economic-focused message amid raging inflation and recession risks as he takes his closing argument for the November midterm elections to a hotly contested congressional battleground on Thursday and tries to reassure restive voters around the country.

President Biden's travels to Syracuse, New York, on Thursday and to Philadelphia on Friday are part of a strategic two-step crafted for a persistently unpopular president: Promote his administration's accomplishments at official White House events while saving the overt campaigning for states where his political power can directly bolster Democratic candidates.

The White House of late has paid outsize attention to Pennsylvania, where Democrats are aggressively contesting a Republican-held Senate seat to help offset potential losses in other marquee Senate races.

Publicly, the White House and senior Democratic leaders express optimism that they'll defy traditional midterm headwinds and retain control of Congress. But in private, there is angst that the House will be lost to Republicans and that control of the Senate is a coin flip.

It's a position that Democrats point out is far more favorable than earlier in the election cycle — particularly before the Supreme Court's decision overturning Roe v. Wade ended constitutional protections for abortion and upended the political landscape — yet many in the party are nonetheless bracing for the loss of at least one chamber.

Why Does The President's Party Typically Lose Midterms?

Midterms are approaching. Some wonder if a pattern will continue, and if the sitting president's party will lose seats in this years elections.

"I will say, as the president has said, that we are quite confident that we'll continue to have a Democratic House and a Democratic Senate as we move forward," Jen O'Malley Dillon, a White House deputy chief of staff, told MSNBC on Tuesday night.

President Biden has had a steady uptick in travel in recent weeks, although he has avoided states such as Nevada and Arizona in which Democratic candidates prefer not to be tagged with the national party brand. He has appeared with a smattering of vulnerable House Democrats at official White House events in California and New York and raised campaign cash for candidates in Pennsylvania, Michigan and Oregon, as well as millions of dollars for the Democratic National Committee at fundraisers in Washington and elsewhere. He held a trio of virtual fundraisers Wednesday night for congressional candidates in Iowa, Nevada and Pennsylvania.

A reception scheduled for Friday in Philadelphia with the state Democratic Party, which Vice President Kamala Harris will also attend, will mark President Biden's 15th visit to Pennsylvania during his presidency. Plans for a joint appearance in the state with former President Barack Obama are in the works for next week.

Also next week, President Biden is scheduled to headline a political rally Tuesday in Florida. Democratic gubernatorial candidate Charlie Crist has been publicly encouraging the president to campaign with him in a state that has increasingly trended toward Republicans in recent election cycles.

In Syracuse on Thursday afternoon, President Biden will showcase a significant investment by the U.S.-based company Micron, one of the largest microchip manufacturers in the world. The company has credited a new law boosting domestic production of semiconductors for its new, so-called megafab in the area that will create 50,000 new jobs, which will pay an average of $100,000 a year.

Senate Majority Leader Chuck Schumer, privately encouraged the White House to deploy President Biden to Syracuse for a Micron-specific event, according to a person familiar with the conversations. Democrats believe that will help voters to draw a direct connection to the party's achievements and job growth. The person insisted on anonymity to detail private conversations.

White House officials said President Biden would use the Micron event to hammer home a closing message aimed at framing the contrast between the two parties' economic agendas — an argument that the president began sketching out at a Democratic National Committee event earlier this week.

"Everybody wants to make it a referendum, but it's a choice between two vastly different visions for America," President Biden said of the midterms. "Democrats are building a better America for everyone with an economy that grows from the bottom up and the middle out, where everyone does well. Republicans are doubling down on their mega MAGA trickle-down economics that benefits the very wealthy."

He continued: "It failed their country before and will fail it again if they win."

In recent weeks, President Biden has used the presidential bully pulpit considerably to promote Democratic accomplishments, from boasting about his infrastructure law while standing next to a rebuilt bridge in Pittsburgh to reassuring seniors in Portland, Oregon, that they will soon see the costs of prescription drugs capped.

Still, there's some concern among Democrats that voters are not connecting economic growth in their communities often enough to what a Democratic-controlled government has completed during the first two years of President Biden's presidency.

"I think we have to be far more aggressive," said Rep. Ro Khanna. "We're actually bringing jobs back, but we're not going out enough and acknowledging people's anger and fear and say, 'Here's what we're doing.'"

The Syracuse area is home to a House race for a seat being vacated by moderate Republican Rep. John Katko, a critical pickup opportunity for Democrats in a district that President Biden won by more than 7 percentage points in 2020. President Biden's visit could also give a boost to New York Gov. Kathy Hochul, whose reelection contest against Republican Lee Zeldin has tightened in recent weeks. Schumer, Hochul, Katko and Democratic Sen. Kirsten Gillibrand will all be at the event, according to a White House official.

Cabinet officials are fanning out nationwide to promote the administration's economic message. For instance, Treasury Secretary Janet Yellen will travel to Cleveland on Thursday to talk about President Biden's manufacturing agenda with Sen. Sherrod Brown. The retirement of his Republican colleague, Sen. Rob Portman, has led to another critical Senate race, this one between Republican J.D. Vance and Democrat Tim Ryan.