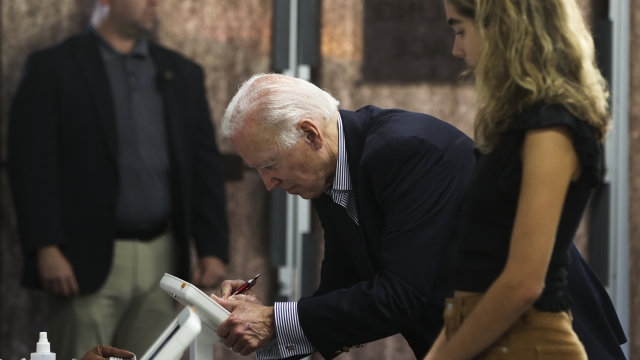 President Joe Biden voted Saturday alongside his granddaughter Natalie, who is 18 years old.

President Joe Biden — accompanied by one of his granddaughters, a first-time voter — cast his midterm ballot on Saturday.

In-person early voting in his home state of Delaware, where President Biden regularly returns for weekends, began Friday. Democrats nationwide have encouraged voters to take advantage of early voting, either by mail-in ballots or at precincts where available to maximize turnout.

President Biden said he was feeling good about the midterms, which will decide control of Congress for the next two years.

In the final days before the Nov. 8 elections, President Biden plans to step up his campaign travels with scheduled trips to Pennsylvania, Florida, New Mexico and Maryland to stump for Democratic congressional and gubernatorial candidates.

"I'm going to be spending the rest of the time making the case that this is not a referendum. It is a choice. A fundamental choice," he said. "A choice between two very different visions for the country."

President Biden voted alongside his granddaughter Natalie, who is 18 years old. He also voted in Delaware last month, when he made a quick, one-day trip for the state's Sept. 13 primaries.

Delaware has no competitive congressional races this cycle.