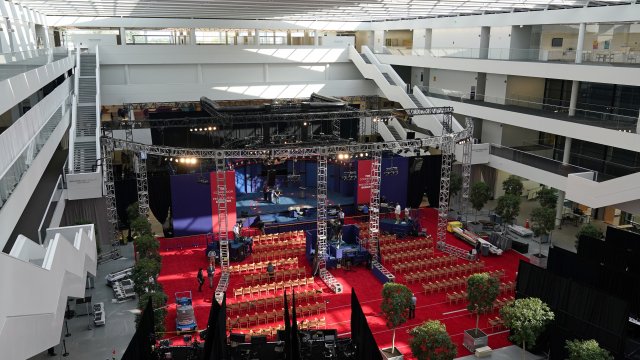 It's appointment television for tens of millions of Americans.

And interest in the first debate between President Donald Trump and Joe Biden may hit an all-time high on Tuesday -- ahead of one of the most unique elections in U.S. history.

"We saw four years ago, record viewership, that first presidential debate and between Donald Trump and Hillary Clinton drew more than 80 million viewers, most watched debate and history of presidential debates. And I fully expect this interest and attention to continuing and particularly during the time that we're in," said Mitchell McKinney, the director of the Political Communication Institute at Missouri University.

President Trump enters the showdown as the underdog -- trailing Biden by a significant margin nationally. His campaign -- struggling to overcome the negative marks his administration received from the US response to the coronavirus.

Biden takes the debate stage with a lead that looks more modest in key battleground states and a campaigning schedule that pales in comparison to the incumbent -- a favorite attack line from the president.

Putting to rest any questions about Biden's readiness to lead will be a top priority for the Democrats during the 90-minute debate.

"Joe Biden has to be careful. I think that his usual style, much more reserved style, doesn't seem to just get lost where he fades away. If so, that would play into the Trump narrative of Joe Biden. As we've heard the taunt sleepy Joe, or he's not up for this task," said McKinney.

For President Trump - proving better days are ahead following a year ravaged by a public health crisis and economic strife will be key.

And time is running short for both candidates. Close to a million votes have already been cast. And legal battles are playing out across the country as states scramble to alter voting procedures amid the pandemic.

Moderator Chris Wallace will focus on election integrity, racial injustice, the coronavirus and the economy. Not to mention a newly vacant Supreme Court seat both sides hope will motivate voters.

Despite potentially record viewership, polling shows most voters say their minds are made up. And a plurality -- 44 percent -- say the debate is not important in helping them make up their minds.