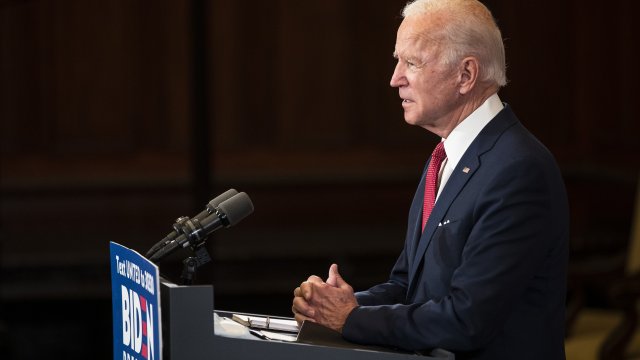 "Donald Trump has turned our country into a battlefield riven by old resentments and fresh fears," Biden said. "He thinks division helps him. His narcissism has become more important than the nation’s well-being he leads."

Biden's remarks come after a week of violent protests, including the tear gassing of peaceful protesters outside of St. John's church in Washington so the president could pose for a photo after his speech Monday evening, sparking outrage from the religious community.

The president told Americans his priority is restoring law and order.

"I am taking an immediate presidential action to stop the violence and restore security and safety in America," he said. "I am mobilizing all available federal resources, civilian and military, to stop the rioting, alluding to end the destruction and arson, and to protect the rights of law abiding Americans, including your Second Amendment rights."

He reiterated the sentiment Tuesday, calling for "overwhelming force," "domination" and deployment of the National Guard. Biden, meanwhile, used his address in Philadelphia to speak about moving the country forward.

He laid out a plan for his first 100 days in office, but said change needs to start before the election. He is calling on Congress to take on police reform, including outlawing chokeholds, stopping the transfer of "weapons of war" to police forces, and creating a use of force standard. Biden says if elected, he will create a national police oversight commission, implement community policing, and ask every police department to review hiring, training and deescalation practices.

In the days following the death of George Floyd, the administration has been silent about plans for police reform, only saying the Department of Justice will aid in Floyd's specific case.

The Trump campaign, reacting to Biden's remarks, said in part that the former vice president has encouraged rioters while the president is "restoring the nation to order and is clearly the leader we need to return the country to peace and prosperity.”