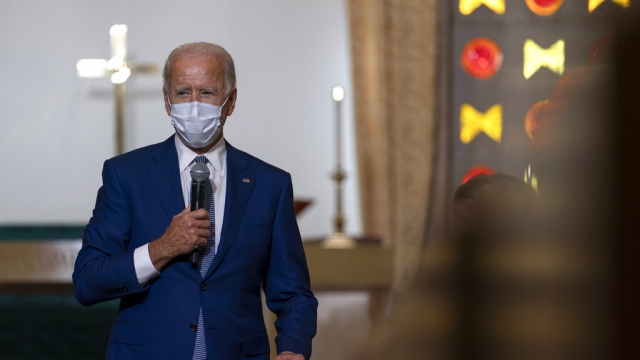 The Biden campaign is working to reach religious voters ahead of the election, one political stop and advertisement at a time.

“Joe Biden’s faith has carried him through dark times,”read a narrator in an advertisement.

The campaign is flooding a market recently reserved for Republicans. Here are the numbers. 80 National Faith Engagement Events Since July. More than 350 faith leaders tossing their vote towards Biden. A seven-figure ad campaign airing strictly on Christian TV and media. Two op-eds from the candidates centered on Christian faith.

The campaign also released an additional round of ads in Arizona, Florida and Texas Tuesday targeting Latino faith voters.

“In the past, there would be some ad buys on Christian radio. But it was done quietly. The Biden campaign has been so robustly faith forward,” said Obama administration faith director Michael Wear.

"There is this sense that the Republican incumbent has opened up new opportunities for Democrats with religious voters," said Wear.

Take "Pro-life Evangelicals for Biden,"  a group that hopes to get faith voters to look beyond traditional conservative issues, like abortion.

Biden faith engagement director Josh Dickson, a former conservative evangelical, tells Newsy it’s a journey he had to embark upon himself after taking a teaching job in a low-income neighborhood.

"That was the first time that I really saw up front up close and personal, all the ways in which systemic injustice, systemic racism, really impact people on a day to day way. And I think it really pushed me to re-examine some of the the ways in which I had viewed the application of my faith," said Dickson.

"The big focus of our campaign is really making an overall moral argument that you know, we are in the battle for the soul of our country," Dickson explained.

While Dickson appeals to moral arguments against the president, groups like the Republican Lincoln Project focus on perceived hypocrisy.

But despite the efforts, a poll from Pew Research shows a majority of white evangelicals still back the president.

They see him as their best route to end abortion rights, a defender of religious liberty for them and other Christians around the world and back the president’s support of Israel.

However, there’s been a major dip among white Catholics for President Trump, dropping from 59% in late July to 52% in October.

Conservatives and the president are working to hold on to that 2016 base, with the pro-Trump group Catholic Vote launching a $9.7 million ad campaign against Biden, pointing out his support of abortion rights.

"We thank you Father for bringing him through this COVID virus," prayed a pastor during a recent Trump event.