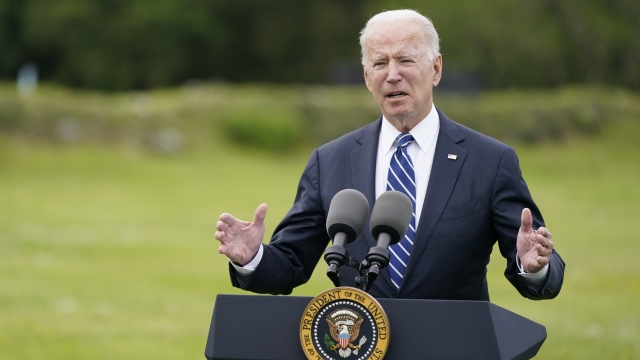 SMS
Low Expectations, Days Before Pres. Biden To Meet Putin
By Sasha Ingber
By Sasha Ingber
June 14, 2021
The big deliverable of the summit is likely to be on the arms control front, says a Russia expert. But President Biden's list of grievances is long.
SHOW TRANSCRIPT

Months after calling Vladimir Putin a “killer,” President Joe Biden is now days away from meeting with the Russian leader on his first trip overseas.

"I think the big deliverable of the summit will likely be on the arms control front. We should expect the two leaders to announce the beginning of arms control and strategic stability dialogue going forward."

Andrea Kendall-Taylor led Russia policy for the Biden transition team. She says common ground with the former KGB agent is sparse, though the Biden administration hopes it can include addressing climate change and countries like North Korea.

Meanwhile the president’s grievances are expanding. Take it from former U.S. ambassador to Russia, Michael McFaul:

I don't think anybody should have any illusions that one meeting is going to lead to some stable, predictable relationship with Putin. He doesn't want that. He sees the United States as the enemy. He needs us as an enemy for his own domestic politics at home.

The administration proposed the summit in April, as Russian troops massed along the border with Ukraine, causing fears of escalation into war. But there are also ransomware attacks hitting critical U.S. infrastructure... brazen efforts to influence our elections… imprisoned Americans… and the use of chemical weapons on dissidents.

That’s Mikhail Khodorkovsky, once Russia’s wealthiest person, until he funded opposition parties and was jailed for a decade. (Now the founder of Open Russia, he also has an English-language blog called Explaining Russia.)

The meeting is set for Wednesday in Geneva, where former president Ronald Reagan first met Soviet leader Mikhail Gorbachev. And some experts say just sitting down together is important -- including a former spy who founded a Harvard-sponsored discussion group with retired Russian and American military and intelligence officers.

"It establishes a process that we don't have, the channels of communication right now are broken down between the US and Russia. They need to be restarted. Only Putin and Biden can do it," says Rolf Mowatt-Larssen, former Chief of Europe Division at the CIA, now a co-Founder of the Elbe Group.

What’s certain, the meeting will stray from former President Donald Trump’s in Helsinki, where he defied the U.S. intelligence community’s conclusion that Russia meddled in the 2016 election. Now, Biden’s National Security Council... just striving for stability:

“We’ve said from the beginning that we are not interested in a reset nor do we want escalation with Russia," Eric Green, the NSC's senior director for Russia and Central Asia, said at a recent conference.

A cold start, decades after the Cold War.