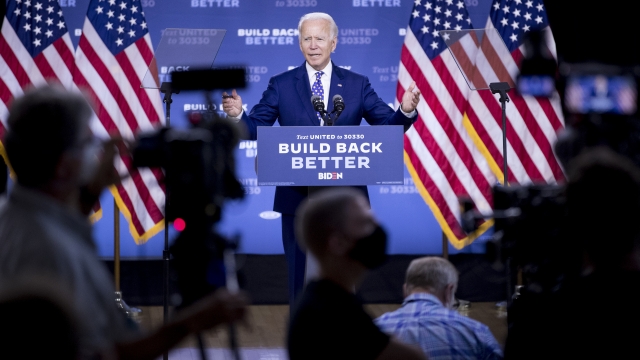 Biden made the comment to reporters Tuesday after a speech in Wilmington, Delaware, but he didn't give any hints as to who he might choose.

Biden has pledged to pick a woman as his vice president, with many calling on him to choose a woman of color. Among those said to be under consideration are Sen. Elizabeth Warren, Sen. Kamala Harris, former national security adviser Susan Rice and Rep. Karen Bass.

On Tuesday, Biden was spotted holding notes with Harris' name and talking points about her. The talking points included "Do not hold grudges," "Great help to campaign" and "Great respect for her."

Harris and Biden clashed on the debate stage last year over the issue of busing in the education system, with the senator saying she had benefited from it as a child and criticizing Biden for opposing it when he was in Congress.

Harris has said since that she does not regret criticizing Biden in the debate.

On Monday, Biden was seen taking a walk with Bass, a California congresswoman, after the two paid their respects to the late Rep. John Lewis.

Warren is scheduled to fund raise with Biden on Friday and as the Hill reports, the two have have spoken multiple times in recent months.

Rice has plenty of government experience and has been close to Biden for years, but she has never run for office.

If Biden picks a Black woman as a running mate, she would be the first on a major party presidential ticket.