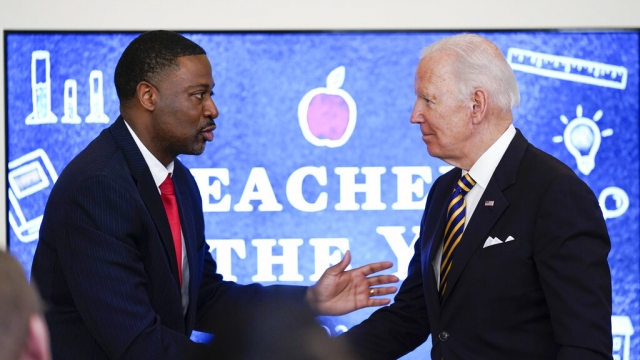 President Joe Biden congratulated the 2022 national teacher of the year on Wednesday by offering a deeply personal story saluting school leaders who helped him overcome a serious childhood stutter decades before he had White House aspirations.

"I wonder how I got here. I got here because of my parents and my teachers," President Biden said in a long, heartfelt deviation from his prepared remarks during a ceremony in the East Room of the White House. "That idea is exemplified by the national teacher of the year."

The president and first lady Jill Biden, who continues to teach English at a community college in suburban Washington, cheered Ohio history teacher Kurt Russell, the 2022 national teacher of the year, and finalists for the award who gathered from each state.

"Teaching is not what Jill does, it's who she is, like most of you," the president said, before telling the crowd about his problem as a child speaking — especially in class or otherwise publicly — "when I stuttered, everyone thinks you're stupid. Totally incompetent."

President Biden has talked openly about battling a childhood stutter in the past, including while running for president in 2020. But he stressed on Wednesday the importance of teachers in helping him with that effort. 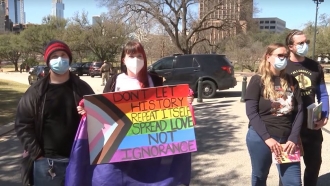 "I have teachers, I can name the ones through grade school, high school, even college," the president said. "I didn't really beat my stutter — and still occasionally I do (stutter) — until I took a speech debate class in college just to force myself to be able to stand up."

Biden recalled being an adjunct law professor and said he once made extra money as a substitute teacher, drawing laughs by sternly admonishing the crowd, "you should be nicer to them." He called for increasing teacher pay — a position that draws broad bipartisan support even if following through on raises don't often materialize in many parts of the country.

The president also got political, decrying Republican-led efforts in some states to restrict some books taught in classrooms or available in school libraries after some parents objected to subject matter they saw as too sexually explicit or overly politically correct.

"Today, there are too many politicians trying to score political points banning books," Biden said. "All because it doesn't fit somebody's political agenda." He added of teachers, "We have got to stop making them the target of the culture wars."

Russell summed up his profession by saying, "Each student needs a champion, no matter what the circumstances are."

That echoed the sentiments of the first lady, who said of great teachers, "it's not the curriculum or the classroom tactics, it's that smile that tells students that they don't have to be afraid to answer out loud."

"It's the calm in your voice that can still the wild horses running through their hearts," she added. "It's the way that you know that, sometimes, 'I'm fine' means everything is wrong."

When Jill Biden talked about teachers changing lives "student by student," her voice began to crack, before she laughed and said "Now I'm getting emotional."