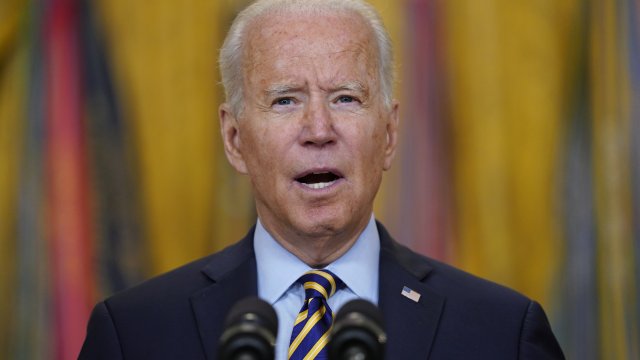 President Joe Biden is set to sign on Friday an executive order that the White House bills as an effort to target anticompetitive practices in tech, health care and other parts of the economy while boosting workers' wages and consumer protections.

The sweeping order includes 72 actions and recommendations that the White House says "will lower prices for families, increase wages for workers, and promote innovation and even faster economic growth."

The order includes calls for banning or limiting noncompete agreements to help boost wages, allowing rule changes that would pave the way for hearing aids to be sold over the counter at drugstores and banning excessive early termination fees by internet companies. It also calls on the Transportation Department to consider issuing rules requiring airlines to refund fees when baggage is delayed or in-flight services are not provided as advertised.

"In total, higher prices and lower wages caused by lack of competition are now estimated to cost the median American household $5,000 per year," the White House said in a fact sheet outlining the order Biden is expected to sign at an afternoon ceremony. "Inadequate competition holds back economic growth and innovation."

The White House said Biden's order follows in the tradition of past presidents who took action to slow growing corporate power. Teddy Roosevelt's administration broke up powerful trusts that had a grip on huge swaths of the economy, including Standard Oil and J.P. Morgan's railroads. Franklin D. Roosevelt's administration stepped up antitrust enforcement in the 1930s.

Biden's order includes a flurry of consumer-pointed initiatives that could potentially lead to new federal regulations, but it also includes plenty of aspirational language that simply encourages agencies to take action meant to bolster worker and consumer protections.

The order seeks to address noncompete clauses — an issue affecting some 36 million to 60 million Americans, according to the White House — by encouraging the Federal Trade Commission to ban or limit such agreements, ban unnecessary occupational licensing restrictions and strengthen antitrust guidance to prevent employers from collaborating to suppress wages or reduce benefits by sharing wage and benefit information with one another.

White House press secretary Jen Psaki said earlier this week that the provision would help workers in construction, hotel services and other blue-collar industries whose ability to seek better wages is often stymied by noncompete clauses.

The Biden administration in the order also calls on the Federal Maritime Commission to take action against shippers "charging American exporters exorbitant charges" and the Surface Transportation Board to require railroad track owners to "strengthen their obligations to treat other freight companies fairly."

The White House argues that rapid consolidation and sharp hikes in pricing in the shipping industry have made it increasingly expensive for U.S. companies to get goods to market. In 2000, the largest 10 shipping companies controlled 12% of the market. They now control about 82%, according to the Journal of Commerce.

The World Shipping Council, an industry trade group, pushed back in a statement that "normalized demand, not regulation," is the answer to rising costs. Eleven of the past 12 months have seen year-on-year growth of more than 10%, the council noted. In the 18 years before the coronavirus pandemic, the average growth rate was 4.7%.

"There is no market concentration 'problem' to 'fix,' and punitive measures levied against carriers based on incorrect economic assumptions will not fix the congestion problems," said John Butler, president and CEO of the council.

The order also seeks to take aim at tech giants Facebook, Google, Apple and Amazon by calling for greater scrutiny of mergers, "especially by dominant internet platforms, with particular attention to the acquisition of nascent competitors, serial mergers, the accumulation of data, competition by 'free' products, and the effect on user privacy."

It notes that over the past two decades the U.S. has lost 70% of the banks it once had, with around 10,000 bank closures. Communities of color and rural areas have been disproportionately affected.

To begin addressing the trend, the order encourages the Justice Department as well as the Federal Reserve, the Federal Deposit Insurance Corporation and the Office of the Comptroller of the Currency to update guidelines to provide greater scrutiny of mergers. It also encourages the Consumer Financial Protection Bureau to issue rules allowing customers to download their banking data and take it with them.

The order includes several provisions that could affect the agricultural industry. It calls on the U.S. Department of Agriculture to consider issuing new rules defining when meat can use "Product of USA" labels. It also encourages the FTC to limit farm equipment manufacturers' ability to restrict the use of independent repair shops or DIY repairs — such as when tractor companies block farmers from repairing their own tractors.

Marc Perrone, president of the United Food and Commercial Workers International, a private-sector union representing 1.3 million workers, said the order "sends a clear message that this White House is committed to creating a level playing field for American workers."

Sen. Amy Klobuchar, a Minnesota Democrat who serves as chair of the Senate Judiciary subcommittee on competition policy, said that Biden's executive order needs to be buttressed by congressional action.

"Competition policy needs new energy and approaches so that we can address America's monopoly problem," Klobuchar said. "That means legislation to update our antitrust laws, but it also means reimagining what the federal government can do to promote competition under our current laws."

But some business advocacy groups warned the order could slow the economy.

Alfred Ortiz, president and CEO of the Job Creators Network, called the order a "grab-bag of political priorities that will have mixed results." He applauded provisions that call for relaxing occupational licensing requirements and promote health care price transparency, but he said that other aspects, such as regulating internet termination and in-flight WiFi fees, "meddle in the free market" and may lead to higher prices for consumers.