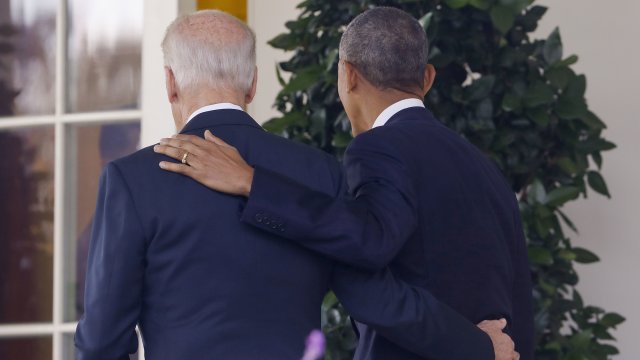 It's a meme-worthy relationship. Former President Barack Obama and Vice President Joe Biden's partnership has been well documented as a special one.

Seth Harris, who worked on the Obama-Biden transition team and later in the administration as the deputy secretary of labor, says the relationship between the two men will undoubtedly influence the VP pick Biden will make.

"Both men were very good at listening to one another, taking one another's advice. There wasn't a lot of ego involved," he explained.

Kate Andersen Brower wrote the book on these relationships, and according to her, presidents and their VPs don't typically get along.

"The job itself is extremely frustrating because there's no actual job description," she said. "Vice presidents are often, with the exception of Dick Cheney, gunning for that top job."

Brower says before Biden accepted the job, he made five demands that included private meetings with Obama once a week, having no specific job description and making sure he was the last one in the room when major decisions were made.

But the Biden campaign is at a bit of a crossroads. Many times, the nominee picks someone ideologically different or geographically different to cater to a particular group the nominee themselves may not be able to reach. Think: President John F. Kennedy and Lyndon Johnson; one from Massachusetts and one from Texas. Between the two, they hit all the notes — except they had a notoriously bad personal relationship, and that's something Biden is likely prioritizing.

Biden has said many times he thinks part of the reason he and Obama were successful working partners was they were similar ideologically. But experts say given the climate we're in now, that may not happen.

"He is very moderate. I think I think people are going to want to see him pick a VP who is not willing to, to really work with Republicans in the way that he has," Brower said. "And I think to his credit, it's worked in the past, but because we're so divided right now, he's going to pick somebody who's much more left."

Some of the issues Biden is facing in a pick are things Obama never did. Obama was looking for experience. He hadn't even completed his first term in the Senate when he ran for president. It made Biden, who had been in Congress since Obama was 12, a natural pick. Should Biden become president, he'd be the oldest ever inaugurated.

"So the whole idea of succession becomes much more important," Brower explained. "For him, his biggest issue right now is just energizing the base."

Biden has vowed to have a woman as his VP, and while his list of potential picks still seems to be long and ever-changing, a decision on who he'll choose is expected in the next few weeks.