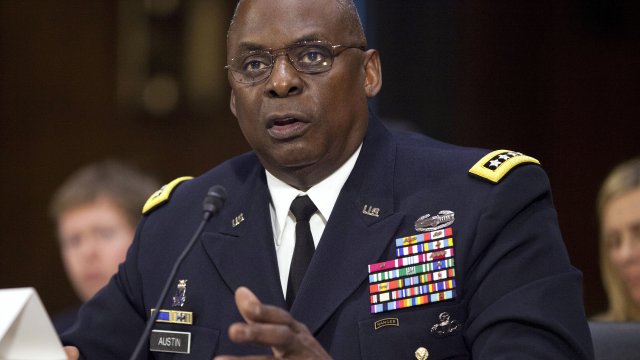 Congress will soon find itself in the same place it was four years ago: deciding whether or not to sidestep norms to confirm the nominee for secretary of defense. The Biden team is nominating retired Gen. Lloyd Austin to run the Pentagon.

The former four-star officer and West Point grad, who also ran U.S. Central Command, retired in 2016. To be confirmed, Austin will need a congressional waiver passed by both the House and Senate. As it stands now, members of the military are required to be retired for seven years before moving to a civilian post. It's only happened twice before, most recently with President Trump's first defense secretary, James Mattis.

Senators in the president-elect's party are already pushing back. As he did with Mattis, Democratic Sen. Richard Blumenthal has said he would not support an exemption, saying in part the waiver "would contravene the basic principle that there should be civilian control over a nonpolitical military."

Mattis' waiver passed with strong Republican support in both chambers. And Senate Armed Services Committee Chairman Jim Inhofe, whose committee will hold confirmation hearings for Austin, says he will support the waiver and believes the rule shouldn't exist. Republican Congressman Don Bacon, a veteran who serves on the House Armed Services Committee,  says he will do the same. He says he's open to possibly changing the rules in the future.

This pick comes after the transition team faced mounting pressure to put Black leaders in the most important positions in the Cabinet. Austin would be the first Black person in the job, in line with President-elect Biden's goal of breaking barriers in his nominations. But should he get the waiver, Austin could have other hurdles to overcome.

He is serving on numerous boards, including at a steel production company and at Raytheon Technologies, one of the Pentagon's largest contractors.