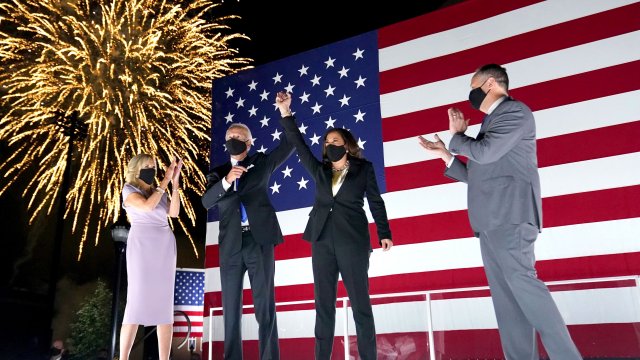 According to The Washington Post, Biden has committed in the past months to rejoining the Paris climate accords and reversing the U.S. withdrawal from the World Health Organization.

He also plans on reinstating the "Dreamers" program for people bought to the U.S. illegally as children, and end a travel ban on 13 Muslim-majority and African nations.

Biden isn't waiting for the White House keys before tackling the coronavirus pandemic. The president-elect is reportedly planning on setting up a task force that could meet within the next few days.

To reach his agenda, Biden will likely have to use executive orders to circumvent Congress. While Democrats are projected to hold a narrow majority in the House, the Senate still leans Republican.

Right now, the tally count on the next Senate is 48 Republicans and 48 Democrats after Tuesday's election. Two seats in Georgia are headed to runoffs on Jan. 5. And seats in North Carolina and Alaska are still too close to call.

If Democrats manage to equal it up in the Senate, ties would be broken by Kamala Harris as vice president.

If not...look for Senate Majority Leader Mitch McConnell to wield his power to put a check on Joe Biden and the Democrats.