Biden Reportedly Closer Than Ever To Running In 2016 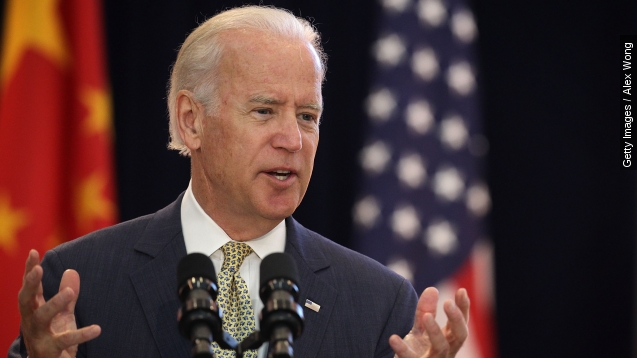 SMS
Biden Reportedly Closer Than Ever To Running In 2016
By Christian Bryant
By Christian Bryant
August 1, 2015
A New York Times article says Biden and his associates are looking into a presidential run, a move that would upend the field of Democrat candidates.
SHOW TRANSCRIPT

"Presidential candidate Joe Biden" is a thought that's been floating around for some time. Even the vice president himself has brought up the idea. (Video via The White House)

"I just truly haven't made up my mind. The good news is everything I think I would have to do to be a viable candidate, is the same thing I think I should be doing to be the best vice president I can possibly be," Biden said on "The View" in 2014.

But Biden could now be as close as he's ever been to throwing his name in the hat for 2016. The New York Times says Biden and his associates are "actively" exploring a presidential campaign.

The article says the decision to possibly run could've been spurred by Biden's late son, Beau, who died from brain cancer in May. Times columnist Maureen Dowd writes before Beau died, "He tried to make his father promise to run, arguing that the White House should not revert to the Clintons and that the country would be better off with Biden values."

If Biden announces his candidacy, it would shake up the current Democratic field of candidates, led by Hillary Clinton. A recent Quinnipiac University poll put Clinton ahead of all other Democratic candidates. That same poll put Biden ahead of Clinton in terms of favorability — even though he isn't a candidate.

Many observers believe Biden would present the biggest challenge to Clinton's campaign because of his work alongside President Obama and his tendency to be a straight-shooter — despite his many public gaffes.

A Biden candidacy could also present an awkward situation for the vice president and Clinton, considering their close relationship. They've worked together and Dowd says in her article Biden recognizes that the Democratic Party has a desire to select a woman as commander-in-chief. (Video via Organizing For Action)

If he does announce his candidacy, this'll be his third time doing so. He ran once in 1988 and again in 2008. Biden has said he plans to make a decision on running for president by the end of the summer. (Video via The White House)