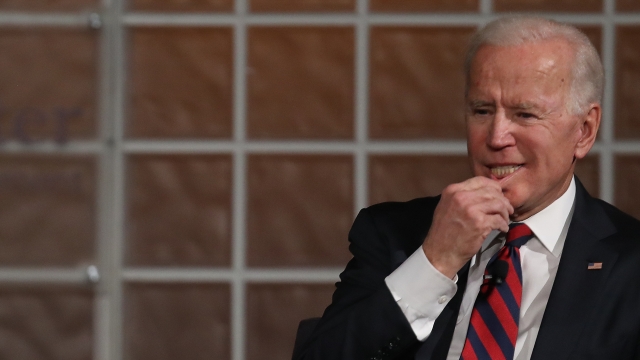 "You know, as they say in parts of my old neighborhood in Scranton, you guys brung me to the dance. You really did. I just want you to know, I had permission to hug Lonny," said former vice president Joe Biden.

Speaking Friday at an electrical workers union conference in Washington, Biden let the audience know jokingly that he did have permission to hug the union's leader.

His remarks follow accusations from multiple women who say he touched them in a way that made them feel uncomfortable. He addressed that topic Friday, as well.

"It wasn't my intent to make light of anyone's discomfort. I realize my responsibility is to not invade the space of anyone who is uncomfortable in that regard and I hope it wasn't taken that way," he said.

But Biden stopped short of directly apologizing for the alleged incidents.

Earlier this week, the former vice president released a video on Twitter, saying he'll be more "mindful and respectful" of personal space, but this was the first time he'd spoken about it in public.

The inappropriate touching claims also come amid speculation about a potential Biden 2020 run, which reporters asked him about Friday.

"I've been told by the lawyers I've got to be careful what I say so I don't start the clock ticking and change my status, but I am very close to making a decision to stand before you all relatively soon," Biden said. "Even if I knew I was going to run for president back in Thanksgiving, I would be the last person to announce, so – give everybody else their day and then I get a shot and we're off to the races."