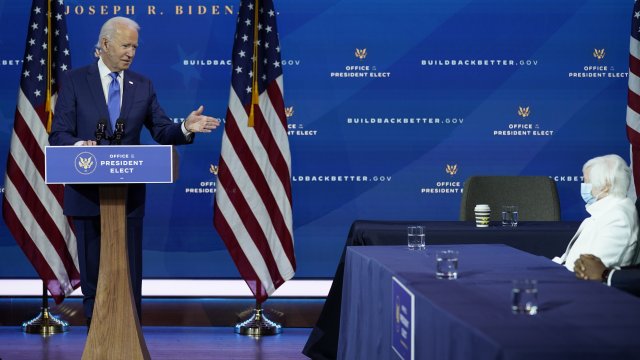 President-elect Joe Biden rolled out his economic team Tuesday as the unemployment rate is still double pre-pandemic numbers. The team, made up mostly of Obama administration vets, four women and two men, will initially focus on guiding the country out of the economic crisis brought on by the still surging coronavirus.

The president-elect says his administration will focus on creating jobs through infrastructure, clean energy and manufacturing. He also called on Congress to pass aid on the same day lawmakers on Capitol Hill unveiled a bipartisan relief proposal. But Biden also campaigned on building an economy "fair" for all workers, and experts say the team he chose has a history of being more focused on inequality and wealth distribution than on just growth, something that might be a concern during the confirmation process.

But while many these nominees will likely sail through, there's at least one who may face a tougher challenge. Neera Tanden, Biden's pick to lead the Office of Management and Budget, has been an outspoken critic of Republicans, particularly on Twitter — ones whose votes she'll need for her Senate-confirmed position. She has also tied President Trump to Russian involvement in the 2016 election.

Texas Sen. John Cornyn, one of the top Republicans in the Senate, called her past comments problematic and said she was "maybe Biden's worst nominee so far."

Biden has not yet announced another top important economic position: director of the National Economic Council, who will likely act as his economic adviser in the White House.