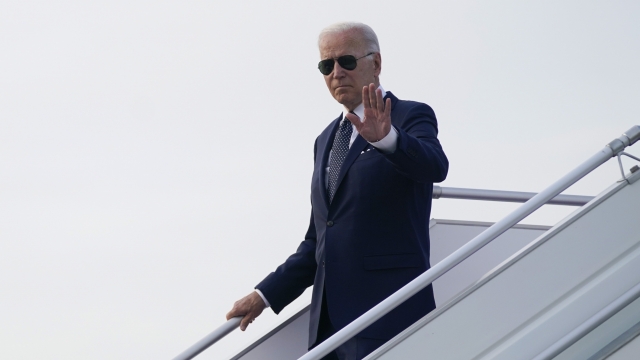 If the railroads and their 12 unions can't agree on a contract within the next 60 days, Congress would likely step in to prevent a strike.

President Joe Biden on Friday blocked a freight railroad strike that would disrupt shipments of all kinds of goods for at least 60 days by naming a board of arbitrators to intervene in the contract dispute.

The widely expected move will keep 115,000 rail workers on the job while the arbitrators develop a set of contract recommendations for both sides to consider. President Biden had to act before Monday to prevent a possible strike. A new round of negotiations is likely after those recommendations are issued.

The president wrote in an executive order naming the arbitrators that he'd "been notified by the National Mediation Board that in its judgment these disputes threaten substantially to interrupt interstate commerce to a degree that would deprive a section of the country of essential transportation service."

If the railroads and their 12 unions can't agree on a contract within the next 60 days, Congress would likely step in to prevent a strike by voting to impose terms or taking other action.

The United Rail Unions coalition said the labor unions are preparing to make their case to the board of arbitrators, and believe that current economic data shows the raises they are asking for "are more than warranted when compared to our memberships' contribution to the record profits of the rail carriers."

The National Carriers Conference Committee, which represents the nation's freight railroads in national collective bargaining, cheered President Biden's move, noting that it "remains in the best interest of all parties — and the public — for the railroads and rail labor organizations to promptly settle the bargaining round on reasonable terms that provide employees with prompt and well-deserved pay increases and prevent rail service disruptions."

"Throughout the bargaining round, the railroads have worked to thoughtfully address issues raised by both sides and have offered pay increases that are consistent with labor market benchmarks and reward rail employees for their essential work," the committee said in a statement.

Any prolonged rail strike could cripple the supply chain that has been slowly recovering from the backlogs and delays that became common during the pandemic because of worker shortages at the ports, trucking companies and railroads as demand for imports surged.

The group that represents Union Pacific, BNSF, CSX, Norfolk Southern, Kansas City Southern and other railroads and the unions have expressed optimism that this new presidential board will be able to help them resolve the dispute that began more than two years ago.

Business groups had urged President Biden to take this step to ensure the railroads would continue operating. They worry about what a strike or lockout would mean for the fragile supply chain because railroads deliver all kinds of raw materials, finished products and imported goods that businesses rely on. A railroad strike could jeopardize the health of the economy.

The board of arbitrators will hold hearings with both sides to learn more about their positions before issuing their recommendations about a month from now. The the unions and the railroads will have 30 days to negotiate a new deal before a strike could be permitted under the federal law that governs railroad contract negotiations.

So far, the two sides have remained far apart because workers want raises that will offset inflation and cover increased health insurance costs while reflecting the current nationwide worker shortages. Railroads maintain that the double-digit raises they are offering over the five year contract that would date back to 2020 are fair based on the kind of raises other companies gave their workers at the time.

The unions are expecting significant raises because the railroads have been reporting record profits in recent years since they eliminated nearly one-third of their employees over the past six years as they overhauled their operations.

The unions also want the railroads to back off their proposals to cut train crews from two people down to one and ease some of the strict workplace rules they have adopted in recent years that workers say make it hard to take any time off.

Agreeing to a new deal would likely help the railroads hire more workers, which they are currently struggling to do. The major railroads have said they each need to hire hundreds more workers to handle the increased demand as the economy recovers and deal with the chronic delays and missed deliveries that have plagued their service this year.