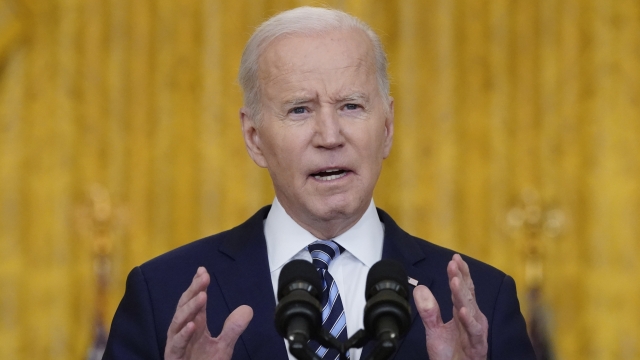 President Joe Biden on Thursday announced a new round of sanctions targeting Russia after its invasion of Ukraine, charging that Russian leader Vladimir Putin "chose this war" and that his country will bear the consequences of his action.

President Biden also said the U.S. will be deploying additional forces to Germany to bolster NATO after the invasion of Ukraine, which is not a member of the defense organization.

The penalties fall in line with the White House's insistence that it would look to hit Russia's financial system and Putin's inner circle, while also imposing export controls that would aim to starve Russia's industries and military of U.S. semiconductors and other high-tech products.

"Putin is the aggressor," President Biden said. "Putin chose this war, and now he and his country will bear the consequences."

"This aggression cannot go unanswered," President Biden said. "America stands up to bullies. We stand up for freedom."

President Biden, for now, held off imposing some of the most severe sanctions, including cutting Russia out of the SWIFT payment system, which allows for the transfers of money from bank to bank around the globe, or Russia's energy sector.

The president also met with his national security team on Thursday morning in the Situation Room as he looked to flesh out U.S. moves in the rapidly escalating crisis.

This report on cyber options being presented to @POTUS is off base and does not reflect what is actually being discussed in any shape or form.

While President Biden described the sanctions as severe, Ukrainian officials urged the U.S. and West to go further and cut the Russians from the SWIFT financial system.

"We demand the disconnection of Russia from SWIFT, the introduction of a no-fly zone over Ukraine and other effective steps to stop the aggressor," Ukraine President Volodymyr Zelenskyy said in a tweet.

The Biden administration, however, has shown some reluctance to cut Russia from SWIFT, at least immediately, because of concerns the move could also have enormous ramifications for Europe and other Western economies. President Biden, answering questions from reporters, appeared to push a decision on SWIFT to European allies.

"It is always an option but right now that's not the position that the rest of Europe wishes to take," President Biden said. He also contended that the financial sanctions he announced would be more damaging to Russia.