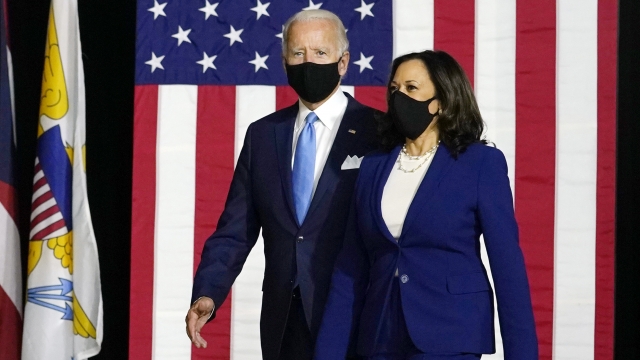 "My fellow Americans, let me introduce to you, for the first time, your next Vice President of the United States: Kamala Harris," Biden said Wednesday at the pair's first joint campaign event.

"And, Joe, I'm so proud to stand with you. And I do so mindful of all the heroic and ambitious women before me whose sacrifice, determination and resilience makes my presence here today even possible," Harris said at the event.

Biden made a historic pick in Harris — and in times of the coronavirus made that pick on Zoom.

Harris, as the daughter of Jamaican and Indian immigrants, is the first Black and South Asian woman to compete on a major party presidential ticket.

"You ready to go to work?" Biden asks Harris in their first campaign ad.

The pair, showing unity in their first day atop the ticket, and hoping to put to rest their rivalry during the Democratic primary.

"Do you agree today that you were wrong to oppose busing in America?" Harris asked Biden during a June debate, referring to his past opposition to federally-mandated busing.

Congressman Jim Clyburn, a key Biden surrogate, told reporters Wednesday there was no hatchet to bury between the duo. They've known each other for years — Harris was close friends with the former VP's late son, Beau.

The Biden campaign is already seeing the success financially of Harris on the ticket. They had their largest grassroots fundraising day ever in the hours after the announcement — raking in nearly $11 million.

President Trump and his allies, meanwhile, are attempting to brand the California Democrat as a member of the far left wing of the Democratic Party.

"She's also known from what I understand as being just about the most liberal person in the U.S. Senate and I would've thought that Biden would have tried to stay away a little bit from that," the president told reporters Tuesday during a briefing at the White House.

But for many Democrats looking for young, diverse voices in the party, Harris is key to recapturing the White House in November.

"This is the jolt of energy that we need on the ticket, and I'm so excited," said Rep. Brenda Lawrence, D-Mich.

Biden and Harris will formally be nominated at the Democratic National Convention beginning August 17.