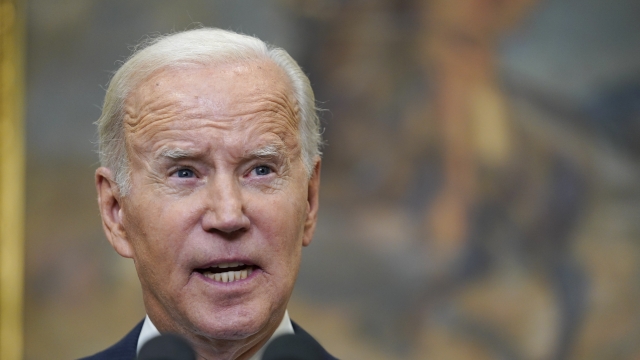 SMS
Biden Faces Backlash Over 'Nuclear Armageddon' Comment
By Kellan Howell
By Kellan Howell
October 10, 2022
The White House is trying to tamp down the wave of criticism since President Biden made comments on a potential nuclear attack by Russia.

The U.S. top military spokesman on Sunday sought to cool off heated debate over the president’s warning of a potential nuclear "Armageddon" with Russia.

President Joe Biden spoke at a Democratic fundraiser on Thursday and warned of the possibility of a nuclear attack by Russia, saying, "we have not faced the prospect of Armageddon since Kennedy and the Cuban missile crisis. I don't think there is any such thing to use a tactical nuclear weapon and not end up with Armageddon."

John Kirby, who also serves as White House national security spokesman said Sunday the president’s comments were an accurate reflection of the high stakes, but not based on any specific new intelligence.

"His comments were not based on new or fresh intelligence or new indications that Mr. Putin has made a decision to use nuclear weapons and, quite frankly, we don't have any indication that he has made that kind of decision," said Kirby.

The president’s remarks have sparked a firestorm of criticism from former top U.S. officials, including from former Secretary of State Mike Pompeo who said Sunday President Joe Biden’s comments were "reckless."

"First of all, those comments were reckless. I think that even more importantly, they demonstrate maybe one of the greatest foreign policy failures of the last decades, which was the failure to deter Vladimir Putin in the same way that the Trump administration did for four years," said Pompeo.

And former Chairman of the Joint Chiefs of Staff Admiral Mike Mullen said the president needed to "back off" the nuclear rhetoric in order to get President Putin to the negotiating table with Ukraine.

"President Joe Biden's language, we're about at the top of the language scale, if you will. And I think we need to back off that a little bit and do everything we possibly can to try to get to the table to resolve this thing," said Mullen.

But Sen. Chris Murphy, a member of the Senate Foreign Relations Committee, defended the president on Sunday, saying he was right to raise the risk of nuclear conflict.

"I think Joe Biden is right to just get this country ready. For the fact that you were dealing with an incredibly dangerous human being in Russia, the war is going badly, and you just can't predict what he's going to do next," said Murphy.

The president’s nuclear warning comes as tensions are heating up between Russia and Ukraine. A new round of Russian missile strikes hitting civilian areas overnight in Ukraine, just hours after a massive explosion on a key bridge between annexed Crimea and the Russian mainland.

Ukrainian troops have made gains in recent weeks, increasing fears that a cornered President Putin may lash out possibly using a tactical nuclear weapon.

Asked if there is a possible end to the war in sight, Kirby said Sunday it would require President Putin to come back to the negotiating table — something he does not seem willing to do.

"We all want to see this war end. It’s gone on way too long. And what needs to happen is for the two sides to be able to sit down and negotiate and find a way out of this peacefully and diplomatically. Mr. Putin has shown no indications — zero, none, that he's willing to do that," said Kirby.

Ukrainian President Volodymyr Zelenskyy has said he will not negotiate with President Putin, but he has not ruled out negotiating with other Russian government officials.