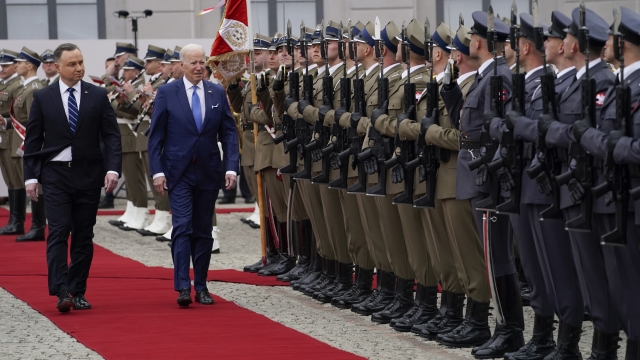 Twenty-five years ago,  President Joe Biden visited Poland's capital with a warning: Even though the Soviet Union had collapsed, some of NATO's original members were not doing enough to ensure the alliance's collective defense.

"Now it is time for the people of Western Europe to invest in the security of their continent for the next century," said President Biden, then a U.S. senator.

He, now as president, has returned to Warsaw and planned a speech Saturday at a time when European security is facing its most serious test since World War II. The war in Ukraine is now in its second month, and Western leaders have spent the past week consulting over contingency plans in case the conflict spreads. The invasion has shaken NATO out of any complacency it might have felt and cast a dark shadow over Europe.

President Biden's national security adviser, Jake Sullivan, said the speech will outline the "urgency of the challenge that lies ahead" and "what the conflict in Ukraine means for the world, and why it is so important that the free world stay in unity and resolve in the face of Russian aggression."

President Biden's remarks will end a four-day trip that included a series of summits in Brussels. Before the speech, he stopped by a meeting of American and Ukrainian diplomatic and defense officials before holding talks with President Andrzej Duda.

Later, he was heading to a stadium where Ukrainian refugees go to obtain a Polish identification number that gives them access to social services such as health care and schools. Some 3.5 million people have fled Ukraine; 2 million are in Poland.

The stadium was built in 2012, when Poland and Ukraine hosted the European soccer championship, and was meant as a symbol of how far the two countries had come since the Cold War. More recently, it served as a field hospital for COVID-19 patients.

"You're in the midst of a fight between democracies and oligarchs," he told members of the U.S. Army's 82nd Airborne Division during a visit to their temporary headquarters. "Is democracy going to prevail and the values we share, or are autocracies going to prevail?"

During a briefing on the refugee response, President Biden said "the single most important thing that we can do from the outset" to force Russian President Vladimir Putin to stop the war "is keep the democracies united in our opposition."

President Biden praised the humanitarian effort as being of "such an enormous consequence" given the scope of the crisis, which adds up to the largest flow of refugees since World War II. He appeared to lament that security concerns "understandably" will keep him from visiting Ukraine on this trip.

Duda, who appeared with President Biden on Friday, said the refugees are "guests."

"We do not want to call them refugees. They are our guests, our brothers, our neighbors from Ukraine, who today are in a very difficult situation," he said.

The U.S. has been sending money and supplies to aid the refugee effort. This week, President Biden announced $1 billion in additional aid and said the U.S. would accept up to 100,000 refugees.

The U.S. and many of its allies have imposed multiple rounds of economic and other sanctions on Russian individuals, banks and other entities in hopes that the cumulative effect over time will force Putin to withdraw his troops.

President Biden was scheduled to return to Washington after his speech in Warsaw.