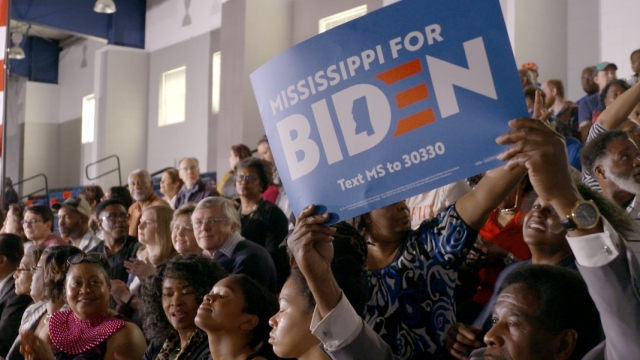 Former Vice President Joe Biden is finding comfort in familiar voters down south. This time, it's Jackson, Mississippi where 36 delegates are up for grabs Tuesday. While Mississippi has less to dole out than some of the other states voting the same day, Biden's allegiance to the southern vote could prove a winning strategy for him.

"He's putting forth the effort the get out the vote. With Bernie going to Michigan instead of Mississippi I was like, come on now. You can't do that. Just throwing all your chips in a bag," said Lamon Stepney. He says he was frustrated to hear that Senator Bernie Sanders canceled his Mississippi event Friday to head to the mid-west instead.

On Sunday, a top Sanders surrogate in Mississippi, Jackson Mayor Chokwe Lumumba said that while he respected Vice President Biden for his loyalty and service under Barack Obama, Sanders’ platform won him over.

"I want you to understand that when you come to us your platform needs to be more that ‘you remember me, I was with that guy, right. You have to talk about some substantive things," he said.

Michigan may have the biggest number of delegates up for grabs Tuesday, but none of the  democratic contests are “winner takes all," instead delegates are allocated according to the winning percentage. Because Biden is expected to win Mississippi by a large margin and he could clean up in the state.

But there is one voting block the Biden campaign knows it needs to work on: the youth vote. Zuri Williams is still undecided and weighing her options.

"Him coming out to the school and this small gesture means a lot so he is representing himself and saying hey I'm willing to talk to you guys and be a voice," she explained.

Williams is not bothered that Sanders canceled his event and sees why many her age support him.

"He says what the youth want to hear: 'I'm gonna legalize marijuana, college is free.' He has what they have been looking for," she said.

As these voters consider both candidates, they're considering more than the presidency. Senate races could be a pick-up opportunity for democrats with the right candidate at the top of the November ballot. Some voters believe punching a Biden ticket will mean a democratic run Washington in 2021.