With Democrats United, Biden Now Faces Question Of What's Next 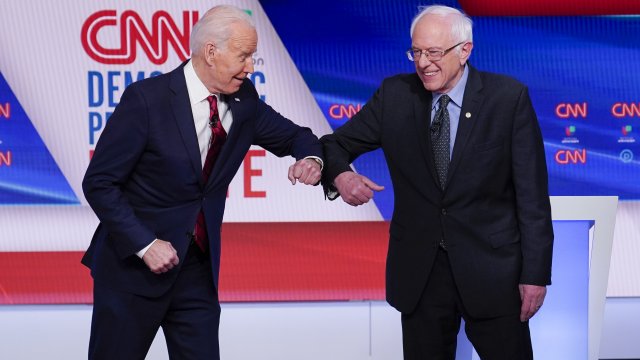 SMS
With Democrats United, Biden Now Faces Question Of What's Next
By Andrew Rafferty
By Andrew Rafferty
April 17, 2020
The nomination is secured and the endorsements have been made. Now the Biden campaign has to figure out how to stay visible.
SHOW TRANSCRIPT

Joe Biden is coming off one of the best weeks of his 2020 campaign. Muscling his way back into headlines that have been dominated by the coronavirus.

Joe Biden is coming off one of the best weeks of his 2020 campaign, muscling his way back into headlines that have been dominated by the coronavirus.

But having achieved all the major milestones of a competitive primary, the question the Biden campaign now faces: What's next?

"This is a lull period. But that doesn't mean that important things aren't going on . And Biden needs to be fundraising and he needs to be responding and maybe even attacking on his own.

Even under normal circumstances, campaigns typically slow down between when a candidate wraps up the nomination and announces a running mate.

That respit is hitting Biden particularly hard after his campaign was confied to his Deleware home last month, forcing him to ramp up his digital outreach.

It has rattled some supporters as President Trump holds daily briefings on national television.

As well as a new podcast whose guests have included Michigan Gov. Gretchen Whitmer -- a buzzed about potential running mate.

And Democrats are hopeful that their newly minted party unity can help give Biden a boost. Biden told supporters the campaign raised more than $5 million after the endorsements.

The heavily circulated videos with Sen. Bernie Sanders and former President Barack Obama got dramatically higher views than a typical Biden campaign video -- which could be helping grow his online presence.

Bernie Sanders and Barack Obama have gigantic online followings so he needs to mobilize them as surrogates. And having won their endorsements this week is a very positive step for him.