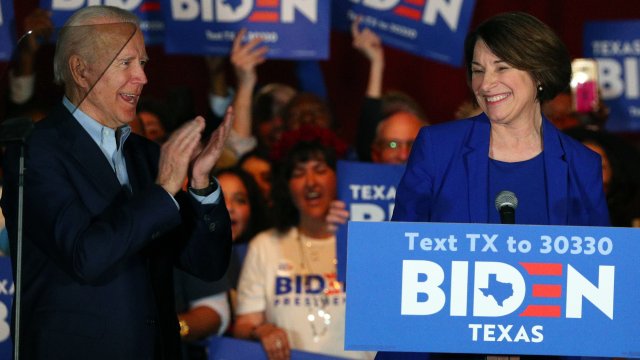 Pandemic aside, Joe Biden's search for a running mate has differed from past campaigns in significant ways.

And pandemic aside, the process has already played out differently than in previous races.

"I'll pick a woman to be vice president," Biden said during what would turn out to be the final Democratic primary debate of 2020.

"He really eliminated a lot of the people who otherwise would have been in the discussion," said Joel Goldstein, author of "The White House Vice Presidency: The Path to Significance, Mondale to Biden."

"And so it has focused the discussion really on fewer people, on the number of women in the Democratic Party, in a way that doesn't normally take place," he added.

Frequently mentioned potential running mates include former 2020 rivals Kamala Harris, Elizabeth Warren and Amy Klobuchar, along with Michigan Governor Gretchen Whitmer, and former Georgia lawmaker Stacey Abrams -- whose candor has been another departure from past norms.

"As a young black woman who often didn't see people like me being asked to serve, when asked the question I was raised to be honest," Abrams told CNN recently.

The presumptive Democratic nominee has said he is looking for a running mate ready to lead from day one and who has strengths in areas where he does not.

But some in the Democratic Party say adding diversity to the ticket will also be essential to motivate voters come November.

"What we need is a candidate at the top of the ticket, a vice presidential candidate, who understands and speaks the language of the base of the party," said Aimee Allison, founder and president of She The People. "Half of Democrats are people of color, a quarter of Democrats are women of color. So it just makes strategic sense."

What remains unclear is whether Biden will have much chance to do the type of road-show auditions that he experienced before being selected as then-Sen. Barack Obama's running mate.

So far these potential No. 2's have been joining Biden in virtual fundraisers, touting his campaign in TV interviews, or joining the podcast Biden started after his campaign was sidelined due to the virus.

Biden has told supporters he hopes to have candidates vetted by July. He will then make a selection ahead of the Democratic National Convention, which has been postponed to mid-August.

"Part of what they're looking to, is find out if there's any baggage that a prospective candidate has that's really too heavy to carry in the campaign," said Goldstein. "But they are also really looking to see if someone is really ready for the bright lights of a national campaign. It's a little bit like going into the major leagues and having to be a star right away."