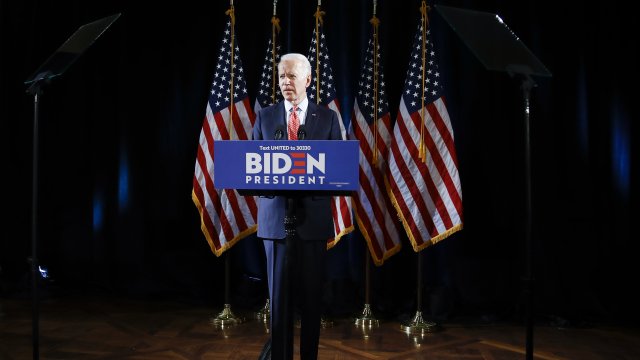 Joe Biden's campaign has been ramping up its digital team in the hopes of engaging young voters while off the trail.

The latest effort -- shared with Newsy -- involves the campaign's first experiment with augmented reality, allowing users on platforms like Snapchat and Instagram to throw on Biden's signature aviators to show their support for the presumptive democratic presidential nominee.

"Our campaign has been really focused on making sure we are communicating with young Americans and meeting them where they are," said Biden deputy press secretary Matt Hill. "Whether it be doing an interview on Snapchat, or Newsy, or launching new fun or creative tools for a digital-first generation, as we've moved to a virtual campaign, it is all part a of broader effort to make sure we are communicating to this core voting bloc that is going to help us defeat Donald Trump."

Biden has focused on a mix of both publicity and policy to reach young voters who he has struggled to connect with throughout the Democratic primary.

That's included an appearance on Snapchat and a virtual event with soccer star Megan Rapinoe, as well as adopting some of the economic and health care policies of former rival Bernie Sanders.

Even as Biden was racking up primary wins on his way to securing the Democratic nomination -- Millennials and Generation Z largely broke for sanders.

A recent focus group survey from the progressive NextGen America found there are "clear warning signs" that voters under 35 in key battleground states are not enthusiastic about the former vice president's candidacy.

But many young Democrats are highly motivated by the prospect of preventing a second term for President Trump. and they have been encouraged by the high-profile support from Sanders and former President Barack Obama.

"The energy and enthusiasm he has championed, especially in younger people, will be critical in moving American in a direction of progress and hope," Obama said in a video announcement supporting Biden.

In normal circumstances those endorsements would likely have been accompanied by big rallies. But like all Biden campaign events since mid-March, the announcements came via videos or livestreams from his Delaware home -- which have proven at times to be challenging to pull off.

"I wish we could have done this together and it had gone a little more smoothly."

But the Biden campaign says those moments won't be what voters are thinking about come the general election.

"When voters go out of the ballot box in November, it's not going to be any one hiccup that happened during a virtual event. It is going to be the issues that matter most in voting for a leader like Joe Biden they know can solve this crisis."