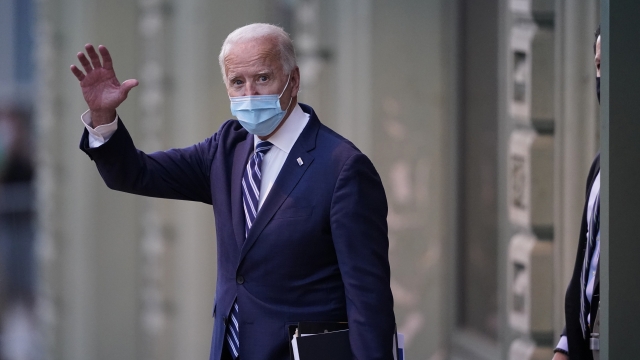 SMS
Biden Campaign Asks For $30M In Fundraising Help
By Newsy Staff
By Newsy Staff
November 12, 2020
According to filings from last month, he had $162 million in the bank, but he likely spent much of that in the final weeks of the campaign.
SHOW TRANSCRIPT

As for President-elect Joe Biden he's still moving forward with his transition, with or without President Trump's help.

But Biden is asking for fundraising help from his supporters.

According to filings from last month, he had $162 million in the bank, but he likely spent much of that in the final weeks of the campaign.

Biden plans to quickly reverse certain policies adopted under the Trump administration once he takes office.

Some of these changes could be made with the stroke of a pen because of President Trump's use of executive orders.

For starters, he could reverse some policies that damaged President Barack Obama's climate legacy.

According to the New York Times, the Trump administration has slashed more than 80 environmental regulations.

"We need a president."

And he says he'll accomplish pieces of it on day one of his administration.

Like rejoin the Paris climate accord the global pact that aims to reduce carbon emissions.

Or make the auto industry more eco-friendly, in part by tightening restrictions on car pollution.

The president-elect also plans to block oil and gas drilling on federal land.

He's said he does not plan to ban fracking outright but that he won't allow new fracking on federal lands.