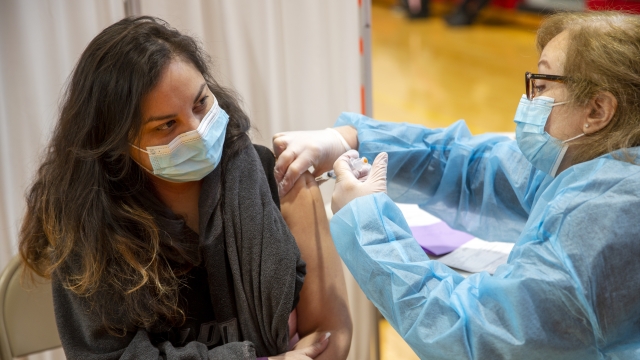 SMS
Biden Administration Takes On Vaccination Goal Of 100M In 100 Days
By Newsy Staff
By Newsy Staff
January 20, 2021
The CDC says more than 31 million total doses have been distributed and nearly 16 million have been administered so far.
SHOW TRANSCRIPT

The Biden administration has set a goal of delivering 100 million vaccinations in the first 100 days.

Those are the magic numbers that he's really been harping on.

While health leaders, like Dr. Anthony Fauci, have said it is possible, it will be a uphill climb.

The latest numbers from the CDC, as of last night, show more than 31 million total doses have been distributed and nearly 16 million have been administered.

President-Elect Biden has promised to add more resources to quickly raise those numbers.

Two other vaccines in late stages of development. Those are Johnson & Johnson and astrazeneca. That could boost the numbers once the two vaccine candidates are approved.

The Biden administration will reportedly implement strict COVID-19 procedures in the white house.

Axios reported the guidance is being given to employees who will be in close proximity to White House principals such as department heads. Biden's team will require staffers to wear N-95 masks and be tested daily for COVID-19. Aides will also soon have access to their first vaccine if they haven't received it just yet.