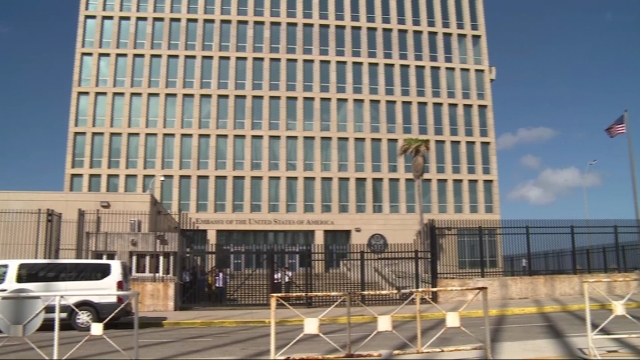 SMS
Biden Plan May Put U.S. Embassy Back In Business In Havana
February 20, 2021
President Biden may restaff the U.S. Embassy in Havana after the Trump administration pulled diplomats from Cuba three years ago.
SHOW TRANSCRIPT

More than three years ago, the Trump administration pulled diplomats from Cuba, following a series of still unexplained health incidents. Now, the Biden administration is considering re-staffing its diplomatic mission. When the flag went up over the U.S. Embassy in Havana for the first time in more than 50 years, it marked not only the resumption of U.S. Cuban diplomatic ties but also a crowning foreign policy achievement for then President Obama,

US President “I have come here to bury the last remnant of the Cold War in the Americas.”

That optimism provided to be wishful thinking. Shortly before Obama left office, U.S. diplomats, some of them were undercover CIA officers, began falling mysteriously ill. The most seriously impacted had brain injuries, doctors that examined them said. Many of the Americans reported hearing strange sounds and the incidents became known as the sonic attacks. By fall of 2017, diplomats, families and non-essential personnel were pulled out by the State Department, leaving a skeleton crew at the newly reopened embassy. More than three years later, the shut down means Cubans still cannot apply for Visas at the Embassy leaving people like Victor, who was hoping to travel to the U.S. to treat a rare form of cancer, stranded.

Victor Alfonso Cedeno, Cuban Cancer patient, “The answer we got was they couldn’t receive the request because the consulate was closed, even though it’s a medical situation, a situation of life or death.”

U.S interests are also not being served. Patrick Oppmann, Havana: "Major changes are underway in Cuba. There have been unprecedented protests by artists. The Cuban government is opening up to more private industry and Raul Castro is expected to step down as head of the island's Communist party in April. But right now there is almost no US diplomatic presence on this island."

The Biden Administration announced it was reviewing the decision to reduce embassy staffing, but what caused the diplomat’s illness may never be known. A study released by the National Academy of Sciences in December pointed to the possibility of concentrated microwave energy as a possible culprit, something Cuba’s investigators have already dismissed.

Dr. Mitchell Valdez Sosa, Cuban Investigator: "There is no physical possibility of a microwave weapon, penetrating hotel rooms, houses, causing brain damage without burning the skin, without burning other tissues.”

A declassed review from 2018 obtained by the National Security Archive indicated that U.S government officials botched the initial investigation into the attacks.

Peter Kornbluh, National Security Archives: "Even a year and a half after all of this began, US investigators did not have the vaguest idea what happened if anything in Cuba and the report makes that pretty crystal clear."

A lawyer for eight of the U.S. diplomats tells CNN his clients are still feeling the impacts of the so-called Havana Syndrome. Even if the Biden administration decides to send other officials to replace them, the mystery of how U.S. diplomats fell ill in Cuba may never be solved.